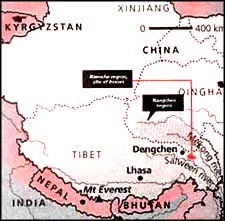 A FRENCH team of anthropologists have discovered an equine species that was thought to have become extinct a long time back. Spotted in the remote Riwoche region of north-east Tibet, the species was known only through depictions in cave paintings (Time, Vol 146, No 22).

The team, led by Michel Peissel, chanced upon these horses in a deep valley positioned in the midst of towering mountain passes located at an altitude of about 5,000 m. The isolated valley reflects a 'lost world' kind of atmosphere, which has kept away the horses from other breeds for thousands of years. As Peissel puts it, "the creation and perpetuation of breeds arises from isolation and this may well be the most secluded area in the world".

Called the Riwoche horses by the French team, this is a breed which has never been identified earlier. Some scientists suspect that these horses could very well be the missing link in equine evolution. The horses are very different from the breeds found in surrounding areas like the Nangchen ponies, which were also discovered by Peissel in 1994.

The Riwoche horses are similar in many ways to much older breeds of horses, for they too sport beige coats, black bristly manes and zebra-like stripes on the back and legs. "The angular shape of the body and the head in particular, is like that of the horses found in stone age cave paintings," asserts Peissel. It is suspected that these horses are about five million years old.

Stephen Harrison, a geneticist at the Royal Agriculture College in Britain, shall carry out the DNA testing of the blood samples collected to determine the relationship of the Riwoche with other equine species. Peissel believes that the forest lying along the 27-krn long valley where this species was discovered is a remnant of an ancient ecosystem cut off from the rest of the world- The sighting of another rare animal - the white-lipped deer - in the same area, supplements the team's suppositions.

But Harrison adds a word of caution by pointing out that a modern animal species could revert to primitive colouring if left in the wild for a number of generations. In his view, a number of known breeds resemble the wild horse species. Further, he warns that "it would be premature to say these horses are a new species. Without conducting tests, it is impossible to tell whether this is a group of wild horses which have evolved in isolation or a feral population which was once domesticated and has since turned wild".

But nothing is likely to dampen the spirits of those who discovered the Riwoche horse. As Peissel says, "true exploration involves setting out to find one thing and discovering another. After all, if you set out to discover something you are already convinced is out there, waiting, it is not exactly a discovery when you find it".