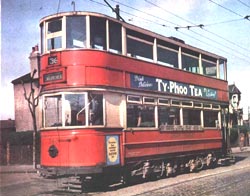 At a time when London's transport system is crumbling, trams are making a comeback. For the first time in five decades, trams will ply on central London's traffic-choked streets to cut congestion. This was announced by the capital's mayor, Ken Livingstone. The two tram routes will cost around us $ 729.4 million. Private and public money will be pumped into the projects. "These schemes will deliver major environmental benefits," Livingstone said and added, "high-quality public transport will encourage regeneration." London last saw trams in 1952 after a boom in private cars pushed them into oblivion. While easing London's transport woes, the two tram routes will carry 138 million passengers a year. The first will run from Shepherds Bush to Uxbridge in west London and is expected to open in 2009. The second, due to open in 2011, will run south from Kings Cross station in central London across the River Thames to Brixton in south London.

Commuter groups have welcomed these proposals. They believe trams would give passengers more choice. Modern trams started plying in London's southern suburbs in May 2000 with the opening of the Croydon-to-Wimbledon line.