Return of the drug 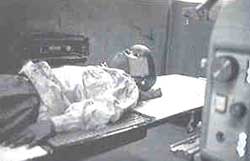 THUS much maligned drug thalidomide - flushed from the market in the '60s, after a furore over birth defects associated with it - is back. Although touted as an experimental treatment for fatality inducing conditions associated with cancer, organ transplants, Alus anti other diseases, a strong anti-thalidomide lobby has emerged recently.

"We are outraged that thalidoi has suddenly raised its ugly head ag, says Randy Warren, head of Thalidomide Victims Associatim Canada. "We thought we were the and last generation of thalidomidi Warren's outrage is shared by Brazilian Movement for Reintegra of Leprosy Sufferers (MORHAN) located 47 people under the age deformed by thalidomide. Its inves tions also revealed 10 other thalidomide babies who died shortly after birth, eight women who resorted to abort after sonograms revealed deformities the foetus.

Although the chilling ptoportions of the problem may not be apparent because of Brazil's geographical size a lack of an official record of cases, Custodio, president, MORHAN, beh that the number of second genera victims in Brazil, where the drug never banned, could be as high as "Thalidomide can be an effective to counter leprosy," says Custodics' an irresponsible lack of control can it in the hands of people who have no idea what its effect can be."

Thalidomide's dismal track record has alerted many countries. The drug was removed from the market in the early '60s after it caused birth defects in an estimated 7,000 to 12,000 babies worldwide. Among the countries who shunned it were Sweden, Germany, France the UK, Switzerland, Australia, and Mexico. Thalidomide was ZsoW in the us. But learning from dutlidornide tragedy, the Food and @ Administration (FDA), us framed CI rules for evaluating new medicines I nearly banned testing of drugs on According to some estimates, ZI 7,000 thalidomide victims in the world today. At least a 1,000 live in Germany, 14 are in the us and 450 live in the UK.

However, scientists and doctors found thalidomide to be effective for a wide range of maladies. "It is am of research that is gathering negeturn and a lot of studies are Vning started," says Georgia pip" of John Hopkins University Smal School in Baltimore, whose up has been testing thalidomide cwKer patients receiving bone ww transplant& Says Roger Jones, managing director of Penn Pharmaceutical, UK, "There is also great hope In the treatment of rheumatoid arthristis.

Altough clinical trials of thalidomide are just beginning, there is widespread bope about the drug being used AIDS patients. In fact, last AIDS groups in the us began drug from Brazil and selling to AIDS victims. The FDA quickly last summer by ask of the groups to stop sell g, However, the groups say is hardly any reason for fear have adopted a cautious Says Sally Cooper, director, With AIDS Health Group in New 'We have been distributing the JuDe and we have a very con programme. People have to get ption every 10 days, read It 20-page booklet of information on the drug.

However thalidomide, cannot be View in simple black and white terms In the near future. "There is always be the question of how the drug is for women and it is for the embryo. And looked at on a case-by Wbe says James Mills of the National Institute of Child Health and Human Development in Bethesda,Maryland.