Return of the headdress 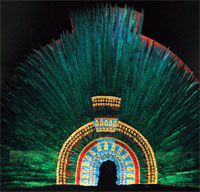 A headdress said to have been worn by the last Aztec emperor of Mexico in the 16th century could temporarily go back home. It is currently displayed at a museum in Vienna, Austria.

Mexico had long held the view that all pre-Hispanic relics were national property and that once in Mexico, they could not leave again. But its Senate recently changed the rules and is drawing up a framework to bring the headdress on loan from Austria, while acknowledging its ownership rights. It is also deciding ways to protect the 500-old fragile crown during transit.

The one-metre-wide headdress is made up of green feathers of quetzal bird and mounted on a base of gold studded with precious stones. Aztec emperor Montezuma is believed to have gifted it to Spanish conqueror Hernan Cortes. No one is sure how it ended up in Austria. BBC says Mexico has tried to get it returned for decades, at one point appealing to the UN.