Return of the storks 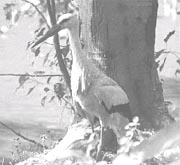 it has been twenty-eight years since the Oriental white stork disappeared from Japan. The birds stopped inhabiting the Japanese countryside due to the overuse of agro-chemicals in paddy fields that killed the loach, a staple food for the birds. In the hope of seeing the birds in Japan again, the Hyogo prefectural government has earmarked a park for these birds hoping that they would nest there. According to experts, the main reason for the disappearance of the wild Oriental white stork seems to be a breakdown in the balance of nature. Dragonflies, butterflies and aquatic insects such as Japanese diving beetles have all died, while loach have been driven away. Birds no longer approach paddy fields, and only rice continues to grow even after agro-chemicals have transformed the chemical balance. The shores of many rivers are now concrete and a number of marshlands where birds once went to feed have been reclaimed. Although the areas are still surrounded by greenery, many living beings have gradually been unable to survive there.