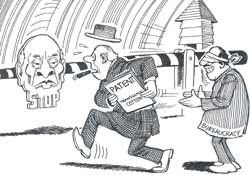 A RECENT move by the government of India should pacify sceptics of the General Agreement on Tariffs and Trade (GATT) and intellectual property rights (IPRs). In a remarkable step, it has begun the procedure for revoking a patent for a method of producing transgenic cotton granted in May 1991 to the US company Agracetus.

A similar patent Agracetus had filed for in the US was later extended to cover all genetically engineered cotton (See box).

However, doubts have been raised about whether India will be able to protect its genetic resources from multinationals because of its inadequate patent laws.

The patent in question relates to a manipulation technique used to make genetic alterations in cotton. Agracetus' method uses Agrobacterium tumefaciens bacteria to ferry foreign genes into cotton cells. The company claims its method can "ensure disease resistance or change in plant quality". This method is used primarily to insert a toxin producing gene from a bacteria - Bacillus thuringiensis (Bt) - into cotton to make it resistant to Lepidoptera pests, such as bollworms.

Sources in the Prime Minister's Office (PMO) said the patent granted to Agraretus was found to be not in accordance with the law and the decision to abrogate it came from none other than Prime Minister P V Narasimha Rao himself.

Agriculture minister Balram Jakhar, who was instrumental in bringing the anomalous patent to Rao's notice, told Down To Earth, "Inventive processes related to agriculture and horticulture, or for that matter, any life form, cannot be patented. In utter contravention of this provision, the cotton patent amounted to a species patent. I am a farmer myself and I cannot harm farmers' interests."

The Union government, invoking the Indian Patent Act of 1970 (IPA), is now expected to serve a show cause notice to Agracetus, asking why its patent should not be revoked.

Cancelling patents is not entirely unknown and is normally resorted to when governments suspect the intention of the patent holder to be either mischievous or prejudicial to the state. Sources in the Indian Council of Agricultural Research (ICAR) say the Agracetus patent could have restricted India's access to a crop line produced by this method - even for research purposes and would have harmed the interests of India's cotton economy. Strangely, the agriculture ministry was alerted to the patent by an article in RAFI Communique, a journal published by the Rural Advancement Foundation International, a Canada-based group that studies the impact of technology on farming. The article reported how the patenting of the transgenic cotton in India and other countries could harm cotton -producing nations.

Says V L Chopra, director general of ICAR, "The scope of this patent is very broad and may cover any cotton species." The agriculture ministry's objection was to the patenting of that part of the Agrobacterium process, which, according to Chopra, is a "text-book technique normally applied to transfer any gene. Patenting of any part of the method may restrict the scope of further research on it."

Iroically the incident also drew attention to weaknesses in India's patenting system and the Indian Patent Office has come in for scathing criticism from non-governmental organisations opposed to IPRs. Said Suman Sahay of Gene Campaign, "This act of omission is a hideous oversight. We have been forced into accepting an IPR, whereas our legal system is not fit to deal with it. The patent office is clearly not the competent authority - they are not even clear about the processes involved."

The discovery of the anomaly sparked accusations and counter-accusations and brought to light the utter confusion prevailing over patenting biotechnological processes. In the first round, the department of industrial development (DID), which is in charge of the patenting system, ticked off the department of biotechnology (DBT) for letting the patent pass.

DBT in turn claimed it was never consulted on the matter and that it has no powers to intervene in the matter of patents. Fingers are now being pointed at the office of the director general of patents, which is the statutory body that grants patents on the basis of recommendations from its technical staff.


However, there are wider dimensions to the problem. A DBT compilation of biotechnology patents revealed that more process patents of dubious nature have been granted to foreign companies. In the wake of the Agracetus revocation, DBT officials are scurrying to track down other patents that are questionable. Confirmed C R Bhatia, DBT secretary, "Some more patents have come to our notice. But we will have to investigate them properly before we can comment."

Embarrassed DID officials are on the defensive, saying, "The area of biotechnology is relatively new and a very complex one. Interpreting IPA can be confusing because it is not explicit on microbiological processes. The interpretation of these have been left open even in the Uruguay round of GATT."

At present, the IPA does not grant patents for "methods of agriculture and horticulture and any process for the medicinal, surgical, curative, prophylactic or other treatments of animals and plants to render them free of disease or to increase their economic value or that of their products." However, there is scope for ambiguity because the classification of microbiological processes under any of these heads often creates confusion.

Clarifies Praveen Anand, advocate and consultant with the office of the director general of patents, Modification of a DNA bit that is used to transfer genes is usually interpreted as eligible under the IPA. Out one can also argue against it by saying the end product is a life form."
However, DID officials take a narrower view and state that products cannot be patented. The Indian law, they say, is concerned only with process no matter what the end product.

The Agracetus incident has thrown up doubts over the outcome of overhauling the IPA to fall in line with GATT. Says Sahay, The now act may even give legal validity to patents such as that of Agracetus." But Jakhar argues rhetorically, "Our legislation will ensure that these follies are not repeated and the interests of our scientists and farmers are protected.

In their move to get the Agracetus patent rescinded, ICAR and DBT officials were not solely by ideological concerns. Lately there has been much concern among Indian scientists working on transgenic cotton over the implications of the straglehold of multinatinals in the field.

Indian scientists find it difficult to gain access to new technology developed for transgenic cotton by foreign companies. Chopra contends that it was the controversy over Monsanto cotton that ensured the ready support of DBT and ICAR scientists for the revocation of the Agracetus patent.

The controversial case relates to the attempt made by the Indian government to enter into an agreement with the US-based been Monsanto company for their transgenic cotton variety, in which the toxin was expressed successfully. (Monsanto has decided to strike a research deal with Agracetus rather than challenge its rights on cotton in the US.) India wanted these seeds to cross them with Indian varieties. It also wanted to obtain their genetically altered Escherichia coli bacteria to produce Bt toxins for use as pesticides.

ICAR sources say India was especially interested in the Monsanto variety because it was resistant to Lepidoptera pests. According to official estimates,about 40 per cent of the value of pesticides consumed in India is to protect cotton plants from these insects. "Propagation of naturally resistant plants can save us a lot of money," says an ICAR scientist.

But in a glaring pointer of how restrictive the IPR can be, Monsanto agreed to part with their seeds only at an exorbitant price of $16 million and to give E. coli only for research purposes. It also refused to extend any protection if accusations of patent it that infringement 's were made against new seedto varieties India might develop by cross-breed-using.

Faced with such conditions, ICAR scientists confidently declined the deal and instead recommended that the funds proposed to obtain the Monsanto cotton be invested in Indian R&D to develop pest-resistant cotton.

However, DBT officials admit Indian R&D has not been successful in achieving the high resistance in cotton, plants. The molecular biology and agricultural division of the Bhabha Atomic Research Centre, the Bose Institute in Calcutta and the National Botanical Research Institute in ho" Lucknow are some of the institutes working on developing transgenic cotton with the Bt toxin.

Worldwide, commercial interest in crop improvement has centred on pest- and disease-resistant transgenic plants. But Bhatia points out that most companies that have completed field trials of transgenic varieties are still awaiting environmental clearances for introducing them in their own countries. It is these companies that are now knocking at India's door.

As a result, concern over the patent system is growing in India, especially after India's weak negotiating positions on IPR at GATT, which allows patenting of microorganisms and microbiological processes or a system of legislation to ensure protection of IPRs.


In the light of the recent developments,, Anand points out, "The possible retaliatory actions of multinationals to the revocation of patents cannot yet be gauged as the Agracetus case is the first of its kind in India."

But officials admit the Agracetus case is definitely a pointer to the need for foolproof legislation to avoid repeating such blunders. Under GATT, a patent can be challenged only on grounds of "public order and morality, protection of human, animal and plant life, public health, or if seriously prejudicial to the environment."

How the IPA will be amended to allow exception to R&D and farmer's interests and protect them from stringent patent protection for vital life forms in other countries remains to be seen.