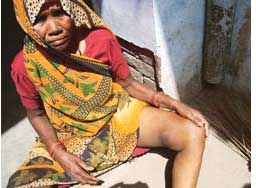 Thousands of tribals in Madhya Pradesh's Rewa district are on the run after they were allegedly attacked by the local administration and upper caste landlords. On April 19, 2007, tribals in Ghateha village, bordering Uttar Pradesh, were evicted from the over 400-hectare (ha) forestland by a large contingent of police and forest department personnel.

According to the tribals, members of upper caste communities were also involved in the attack. Human rights groups say that several of the tribals were injured when the evictors fired at people and dozens, including children, went missing after the police swooped down on over 1,500 landless families.While the district administration maintains it was removing encroachers, Birsa Munda Bhu Adhikar Manch (bmbam), a group among the tribal settlers, the National Forum of Forest People and Forest Workers (nffpfw) and other independent observers question the locus standi of the forest department in carrying out the eviction. They claim that the tribals have rights over the forestland.

The forest department says the tribals encroached into the land on March 15, 2007. But the tribals counter this. "We have been living in Ghateha since 2003. Our stay is legal according to the Scheduled Tribes and Other Traditional Forest Dwellers (Recognition of Forest Rights) Act 2006," says Dadulal Advasi, a tribal leader. "Since we settled here, the upper caste people kept demolishing our dwellings and threatening us," he adds. Survivors of the attack narrate tales of atrocity (see box: Testimonies). "The police cleaned this place up," a shepherd says. "They put the bodies into trucks. I heard that they dumped them in the Yamuna river near Shankargadh (in neighbouring Uttar Pradesh)," he says. "After the attack, the police and the Thakur-Bamans (upper caste landlords) robbed the place," says Mathura Namit, a villager. "They fired charras (12 bore gun pellets) at the people," he said.

The forest sub-divisional officer (sdo) for Ghateha, Manager Singh, denies that the police fired at the tribals. He says the administration had served a notice, under section 80a of the Indian Forest Act of 1927, to the villagers. The notice was 'pasted on two or three huts' in the settlement after the settlers refused to receive it, he says. This is in contradiction to the Indian Forest Act 1927 according to which the notice has to be delivered to every 'encroacher' individually.

Much evidence of the police attack was destroyed in the initial days after the eviction when the survivors went into hiding fearing further assaults. A week-long police cordon also cut off all access to the spot. When Down To Earth visited the area on April 29 and 30 and on May 8, 9 and 10, people were too terrified to respond.

Reports of missing people, especially of children, were trickling in at a slow pace. "The police is challenging us to produce the injured. They know people won't come forward, fearing them," says Ramesh Shukla of nffpfw.
Ghateha is among the 294 villages which are yet to be denotified by the Madhya Pradesh government. So far 2,512 forest villages have been denotified since 1974. Under land rules, a denotified land becomes revenue land and this can be distributed to tribals and other landless people.

Denotification of Ghateha is yet to be completed due to an ownership dispute between the state's forest and revenue departments. But its surrounding villages have been denotified.

When the issue was highlighted in the state assembly in November 2006 and in February 2007, the forest minister, Himmat Kothari, and the chief minister, Shivraj Singh Chauhan, said no eviction will be carried out till the denotification and demarcation processes are completed. The April 19 eviction episode comes in spite of this assurance.


Many allege that the administration is working hand-in-glove with upper caste people who want to occupy the land. "Why did the eviction drive happen on April 19?" asks K K Singh, a Samajwadi Party mla from Sidhi, a neighbouring constituency. On April 18, a delegation led by him met the district collector D P Ahuja. The mla says the delegation briefed the collector of the provisions in the Scheduled Tribes and Other Traditional Forest Dwellers (Recognition of Forest Rights) Act 2006. He says that Ahuja had assured the delegation that no eviction would be carried out in Ghateha.

"We were planning to file an application on April 19, as per the collector's instructions," adds Singh. The Ghateha gram sabha was also scheduled for April 21 and the people had prepared a resolution on the rights of the land under the Forest Rights Act. "The attack was clearly a conspiracy to sabotage the democratic process of rights settlement," Singh says. But the district collector, sdo and the superintendent of police of Rewa, Ravi K Gupta, deny Singh's claims. Gupta says no meeting was held with the collector on April 18. He also claimed that the settlers had tried to torch an upper caste person. But Gupta later admitted that this was the version of the upper caste community.

One May 21, four of the ousted tribals filed a first information report saying that they had received gun pellet injuries, indirectly incriminating the upper castes--the police does not use gun pellets.

Local media reports quote the police as saying that the settlers have links with Naxalites. The landlords echo this. "The police action was for removing the extremists from place," says Narendra Upadhyay, an upper caste person from Ghateha.

The 'incriminating literature' recovered from the settlers and produced by the police consists of copies of the forest rights act and some awareness literature produced by nffpfw. The arms seized from them, were in fact, agricultural tools and traditional tribal weapons.

The forest department has singled out Ghateha, sparing other large encroachments which have existed in the area for decades, allege the tribals. When Down To Earth visited the area it found that seven upper caste landlords from the village have been encroaching about 150 ha of forestland close to the tribal settlement. And, four lower caste people living close by also claim they have patta (rights) for between 2 and 5 ha of forestland. Mahant Ramdas of the Mahatia Ashram, perched on a 18 ha of forestland close to Ghateha says the land had been bought and donated by one of his devotees. "How could forestland have been bought or donated?" the villagers ask. They say another upper caste community, Pathak, have been charging people for grazing animals on their encroached land.