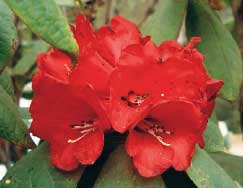 himalayan rhododendrons are flourishing in western countries where they were popularized by plant explorers who visited India and China in the 19th and 20th century. But the tree genus, marked for its beautiful flowers, is disappearing from its natural habitat due to logging for fuel and development projects like dams.

Nearly 43 out of the 90 odd species of rhododendrons found in India are endangered. Rhododendron experts from India, China and Nepal who met in Delhi last month for a workshop short-listed 14 species that are critically endangered (see box below). Most of them are concentrated in the eastern Himalayas, in Arunachal Pradesh and Sikkim in particular.

An action plan is needed for preserving the rhododendrons as many species evolved in the Himalayas, said Sudipto Chatterjee, biodiversity programme co-ordinator for the non-profit, Winrock India International.He recently won a 10,000 award from the UK non-profit Whitley Fund for Nature for conservation planning for rhododendrons. Chatterjee said rhododendrons have an important ecological role. They occur along with conifers and their roots have a symbiotic relationship with fungus but these associations need to be studied in detail. We will try to get the 14 species included in the iucn list. This will help us get support from the Union ministry of environment and forests (moef) that has a committee for endangered tree species, said Chatterjee.

The biggest hurdle in getting rhododendrons protected is that their current status in their habitat is not known. More surveys are needed before a conservation plan can be drawn, said A A Mao, joint director with the Botanical Survey of India (bsi) in Arunachal Pradesh. He has helped conserve 32 of the 80 rhododendron species of Arunachal Pradesh.

Experts at the workshop said hydroelectric projects on the Subansiri and the Teesta rivers in the Northeast would destroy rhododendron forests. In Darjeeling in West Bengal, an entire rhododendron forest was lost when authorities, unaware of the ecology of the area, planted other tree species under an afforestation project said L K Rai of G B Pant Institute of Himalayan ecology and Development in Gangtok.

H Y Mohan Ram, professor emeritus with the Delhi University and member of the moef committee, said the ministry could extend support to rhododendron conservation once their status in their habitat is known. For this, extensive field studies and inventories are required. Reproductive biology studies too will have to be conducted to preserve the gene pool of individual species, said Rajesh Tandon, professor of botany at Delhi University.

Nepal and China have conservation areas for rhododendrons. In India, only Sikkim has rhododendron sanctuariesShingba, Barsey and Uttarey. The Indian government can begin its conservation effort by offering alternative fuel options to people in the Himalayan states, said A R K Shastry, retired joint director of bsi, who has co-authored the book, Rhododendrons in India.

Conserving rhododendrons can also boost the rural economy of Himalayan states. Uttarakhand produces 40,000 bottles of rhododendron juice a year during the flowering season. In Sikkim and Himachal Pradesh they are used for making wine, jam and jelly. The wood is used for making handicraft items.