Scientists solve the mystery of missing mass in the solar system 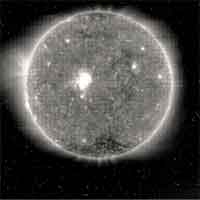 a rhythm in the ebb of sunspot dominates the atmosphere of the Sun and influences life on the Earth as well. Some of the largest sunspots can be even seen without a telescope. Recently, C Westendorp and his colleagues at the Instituto de Astrofisica de Canarias, Tenerife, Spain, claim to have explained a phenomenon of the flow of material into outer regions of spot and its apparent vanishing ( Nature , Vol 389, No 6646).

A mature sunspot is seen in white light that consists of a dark central core known as umbra . In umbra , the magnetic flux (number of magnetic lines per unit area) loop emerges vertically from below. It is surrounded by a ring of dark fibrils called penumbra , where the magnetic field spreads outward. Sunspots may be several times larger than the Earth. It may also be so small that observing it with the help of a telescope could be difficult. Single spots do appear, but most are in pairs or groups, with members of a pair (leader and follower in respect to the direction of the Sun's rotation) having opposite magnetic polarity. This polarity reverses from one solar cycle to the next.

In 1909, a scientist named J Evershed had first noticed the flow of material emanating radially outwards from the sunspots and vanishing abruptly in the outer penumbral edges. This phenomenon apparently violates one of the sacred principles of physics known as the conservation of mass.

Westendorp and his colleagues have used an indirect optical tomographic imaging method to obtain false colour maps of a sunspot. The technique involves using the polarisation data in the visible spectrum and then processing it mathematically to get information about the object.

They have obtained a three-dimensional model of the magnetic field and the flow of material in the vicinity of the sunspot. They find that contrary to the belief, some magnetic lines of force flow back towards the Sun at the outer edges of the sunspot. They drag and carry along the gas back into the Sun thus, solving the mystery of the missing mass. The newly developed technique could provide important clues towards human understanding of the stability and decay of sunspots. As these play a major role in the solar activity, scientists may also find some more clue about the Sun in future.