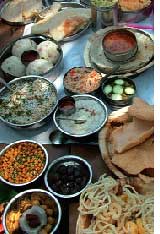 Rice has different gastronomical connotations to different people. It could mean the aromatic biryani or Sambhar-rice or simply dal-chawal. Rice is also top priority of GM pushers and farmers and activists are doing whatever it takes to keep them at bay. After rounds of protests, petitions and public awareness it is the turn of festivals.

More than 150 traditional varieties of rice, from different states, were on display at the Bath Utsav at Hole Hansawadi village in Karna-taka's Shimoga district. Farmers who have preserved the traditional varieties along with scientists from the Organic Framing Research Institute, Shimoga, participated in the festival on April 19.

Apart from rice varieties and publications on rice, over 30 rice food recipes were on display. A rice calendar was released, which marked April as the first month of the rice year. Folk singers entertained with songs on rice and farming.A 1000-foot (305 meters) long Baththa torana (paddy creeper) was the centre of attraction of the festival.