Poor people of the world depend on rice, and rice is in short supply 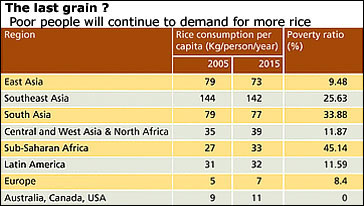 • Annual rice production falls short of demand by 50 million tonnes. Annual growth in rice yield declined from 2.5 per cent during the green revolution (1960-70) to 1.1 per cent since 1980s, while global population grew by 1.4 per cent

• 90 per cent of rice is cultivated in Asia. But 55 per cent of Asians will be in urban areas by 2025, taking over some of the most fertile rice-growing areas

• Thailand and Vietnam have a major market in Africa, which accounts for 40 per cent of Thailand's total exports since 2000. 48 per cent of US export to Africa is through food aid programmes

• Sub-Saharan Africa, where most of the new demand comes from, is getting poorer. Per capita consumption has doubled since 1970

• 43 per cent of rice is cultivated in rainfed area and overlaps with concentrations of poor people. 75 per cent of the world's poorest depend on rice