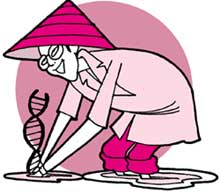 In a development that would immensely help rice breeders worldwide, scientists from the Beijing Institute of Genomics (BIG) have come out with fine genome maps of two most widely grown sub-species--Oryza sativa indica and Oryza sativa japonica.

Four different groups, including the same one at BIG, had published draft genomes for the two sub-species in 2002, but these maps had several gaps and errors. In contrast, the new "much improved, near-complete" maps have been made using whole-genome shotgun (WGS) sequencing, which is far superior to the methods used earlier. Under WGS, the entire genome is broken into random fragments that are sequenced individually and then put together using powerful computer programmes. It's like putting an extremely complex jigsaw puzzle together.

The study will help produce better and high-yielding varieties of rice, which is staple grain for more than half of the world's population. As per the projections by the Food and Agriculture Organization, total demand for rice by the year 2030 will be 38 per cent higher than the annual amounts produced from 1997 to 1999.

The Chinese scientists -- led by Gane Ka-Shu Wong -- who reported their findings in PLoS Biology (Vol 3, No 2), say the two sub-species shared 97.7 per cent genes. They report they also found evidence in the rice DNA sequences that suggested the grasses (rice is one) diverged from other flowering plants 55-70 million years ago.