Fresh evidence from dung of dinosaurs changes many conceptions 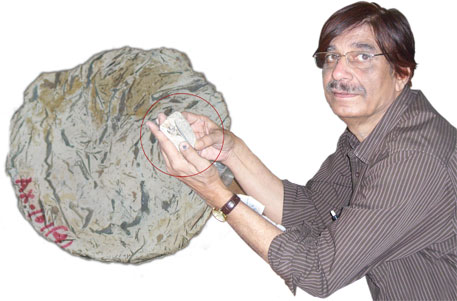 THE fight where and when rice originated has taken a new turn. An analysis of plant remains found in the dung of dinosaurs in Pisdura village of Chandrapur district in Maharashtra has revealed that dinosaurs had relished the staple much before humans added it to their diet. This pushes the origin of rice 35 million years back and raises the possibility that it had an Indian parent. Till now it was believed that rice originated about 30 million years ago in China.

“The fresh evidence also suggests that grass family Poaceae from which rice tribe Oryza originated much earlier than thought, and was quite evolved and diversified during the late Cretaceous period when dinosaurs thrived,” says Bandana Samant, paleopalynologist at RTM Nagpur University and co-author of the study. This fact, she says, also pushes back the evolution of angiosperms “The origin may be during the Triassic period instead of the Jurassic period.”

For the study, the team analysed phytolyths—silica deposits in the plants—in samples of dung or coprolites. “Using phytolyths it is possible to identify the genus and species. It showed remains from the rice tribe,” says Samant. The study was published in Nature Communications on September 20.

Whether rice originated in India or China has long been debated, says Ashok Sahani, emeritus scientist, Centre for Advanced Study in Geology, Lucknow University and co-author. Asian rice, Oryza sativa, is one of oldest crop species. It has tens of thousands of varieties and two major subspecies, japonica and indica. Archaeologists from southeast Asia contend that rice agriculture began in south-central China, along the Yangzte river, and spread from there southwards and to northeast towards Korea and Japan. Archaeologists in India argue that rice cultivation began in the Ganges river valley. There are also two theories of rice origin. Single-origin suggests that indica and japonica were domesticated once from the wild rice Oryza rufipogon. While multiple-origin proposes that these two major rice types were domesticated separately and in different parts of Asia.

The multiple-origin model gained currency in recent years as biologists observed significant genetic differences between indica and japonica, and several studies examining the evolutionary relationship among rice varieties supported domestication in both India and China. But the latest study published in the May 17 issue of PNAS supported the single-origin theory and concluded that Indian subspecies indica, of Oryza sativa, split from the Chinese japonica about 3,900 years ago.

Sahani says this finding is a definite evidence of the origin of rice in India. “In 65 MA India was an isolated landmass, separated from the rest of Asia by oceans. The study suggests a kind of Noah’s Ark status for the Indian landmass, from which plant wealth, including the rice tribe was dispersed when it collided with Asia,” says G V R Prasad, palaeontologist at the Department of Geology, Delhi University. “The findings will also impact the view on how the plant kingdom evolved and dispersed.”
Science & Technology Rice Rice Plant Breeding Maharashtra India History Chandrapur (D) Animal Dung Animal Dung Agriculture
SUPPORT US