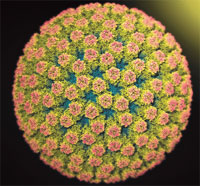 ROTAVIRUSES are one of the leading causes of severe diarrhoea in children across the world. According to WHO estimates, 527,000 children under five, most of them from low-income countries, die of rotavirus infections annually. At present, live vaccines are available to combat the virus. However, there have been some reports of infections induced from vaccines. At a time when vaccines are turning against unsuspecting patients, scientists from Tokyo Uni versity have turned to rice for a solution.

They have tweaked the genes of a rice variety to make it produce antibodies against rotavirus. The antibody is found naturally in llamas, which are resistant to rotavirus. Researchers engineered the rice , dubbed as MucoRice ARP1, by introducing rotavirus antibody gene from llamas in rice genome. They tested their newly-developed rice variety on both normal and immune deficient mice. “It markedly decreased the viral load in immunocompetent and immunodeficient mice,” report the scientists in their study published on August 8, 2013 in the Journal of Clinical Investigation.

The antibody was found to work fine even after year-long storage and heat treatment at 94°C for 30 minutes.

The researchers say the present study markedly extends the potential of rice plants into an antibody production system and can form the basis for orally administered medicine against rotavirus infections. “MucoRice-ARP1 rice powder or rice water offer what we believe are novel approaches to the prevention and treatment of rotavirusinduced diarrhoea. It may be used to reduce the medical and economic burden in both developed and developing countries,” the study notes.

The researchers observe that vaccines have poor effect on immunocompromised individuals and usage of live vaccines could sometimes backfire.

Hence they regard passive immunotherapy (antibodies) as the only available intervention that can offer protection. Though oral administration of antibodies works well as both prevention and therapy in individuals with rotavirus induced diarrhoea, the production and purification of antibodies is a costly proposition, say the researchers.

P Suresh Kumar, senior scientist at the National Institute of Abiotic Stress Management in Pune says, “Rice being the major staple crop among Indians, the result is highly relevant and encouraging for scientists and policy makers to develop rice strains that bear rotavirus antibody to act against diarrhoea.”

“The important aspect of plantbased antibody system is that large amounts of antibodies can be produced at a low cost. In contrast with previous systems, there is no need for purification for this transgenic rice,” says Kumar. “As MucoRice-ARP1 originates from edible rice seeds, the obtained rice powder can be directly used as an ingredient in a broad range of nutraceuticals.”

Kumar informs that unlike antibody producing tobacco leaves and tomatoes, which require storage under low temperature, antibody-producing cereals such as rice and wheat as well as pea seeds can be stored at room temperature.

It remains to be seen if the genetically modified rice is safe or not.