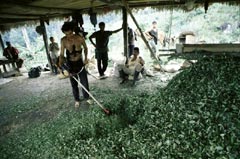 The Colombian government has seized more than 1,00,000 hectares from narco-traffickers and will hand it over to peasant farmers and displaced families as part of its new agrarian reform''. The programme is to unfold over the next four years, with the land expropriated from traffickers by the National Narcotics Directorate (nne), and another 40,000 hectares that the government has purchased. Annulment of ownership and administrative expropriation of illicitly acquired land and goods is included in Colombia's new Land Act, which its parliament passed in December 2003. The beneficiaries -- poor peasant farmers and families displaced by the violence of civil war -- will receive a subsidy limited to the value of the land they receive, and financing that can be as much as 30 per cent of the value of the productive projects they propose.

"It is an agrarian reform with strong follow-up so that the farmers are truly able to get their products to the international markets,'' agriculture minister Carlos Cano said. The initial handover of 560 ha took place in May. A second hand-over -- 2,800 ha -- is scheduled for July.