Ringing in the trams 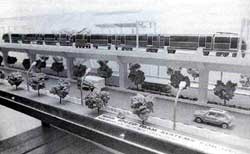 After years of harping on the Mass Rapid Transit System (MRTS) -- a Gordian tangle of subways, ring railway and surface transport -- as the best option for an increasingly congested Delhi, the Union ministry of surface transport (MST) has gone back in time for a solution: it is thinking of ringing in the trams, almost three-quarters of a century after they were taken off the roads to ease traffic flow in the first place. Those ancient tram lines still glisten through the rough macadam in parts of Old Delhi.

And while even after years of planning and surveys, the MRTS still requires two and a half decades to be translated into reality, the MST is confident that the localised tram services plan for the Capital can be implemented within 6 months.

Dinesh Mohan of the Indian Institute of Technology, Delhi, an expert on local transport systems, calls it a pipe dream: "At present, it takes over a year to construct a simple flyover. How will they manage such an elaborate system is such a short time?" He believes that it is a harebrained, "fly-by-night scheme" that might never come off the drawing board.

But C S Khairwal, joint secretary in the MST, says, "It can definitely be completed soon because the technical issues have been sorted out." In any case, the trams, to be operated through an electric overhead traction system, are supposed to be a stopgap arrangement till the MRTS is completed, after which they will play a supplementary role.
The MST is contemplating introducing the system in 22 other Indian cities in the next 2 years and has informally discussed the plan with the respective state governments. It will shortly launch global tenders for bids on a build-operate-transfer basis for the Capital's tramway.

Delhi's political leadership seems sold on the idea, excepting Lt Governor P K Dave, who believes that it is "not viable". Chief Minister Madan Lal Khurana, however, proposes to tour various international cities where trams are in use in mid-October. Says a senior administration official, "The tram system appears to be feasible, but before it is accepted we will have a look at how successful similar systems have fared elsewhere."

Khairwal says that besides providing rapid transport, the tram system will "reduce the use of vehicles and save on fuel, bringing down our import bills and reducing pollution". Because nearly half the 22,000 crore vehicles in the country (1992-93) ply in the 23 cities covered by the scheme, the MST expects to conserve 30-40 per cent fuel. What he didn't touch upon is the dismal electricity situation in Delhi, with every possibility of trams being stranded mid-route during a brownout.

The trams will have to be imported at a cost of Rs 2-3 crore per coach before they are indigenously manufactured. Each tram will consist of 3 lightweight coaches: the driving coach will accommodate 277 passengers and the 2 trailer coaches 294 each. They will have an average speed of 35-40 km/hr and will be equipped with microprocessor-based self-printing ticketing machines. Initially, they will be manned; later, they will run on preprogrammed software. Fares have been tentatively set at Rs 5 for up to 8 km and Rs 7 for anything over.

Khairwal says that tram system, at Rs 7 crore per km, will be cheaper than an underground rail system, which will cost Rs 200 crore per km. The tram system cost for all the 23 cities will touch Rs 8,000 crore.

Khairwal also adds that no land acquisition will be necessary: the trams will run on tracks resting on 5 metre tall prefabricated pillars rooted on the central road dividers. Tram stations, at intervals of 1-1.5 km, will also be elevated. In Delhi, 9 tram corridors have already been identified, with the emphasis on the congested 43-km-long Ring Road.

The system could just about pay off: after Calcutta phased out its trams 2 years ago, it found itself knotted into more traffic snarls than had earlier been the case.