Ripples across the border 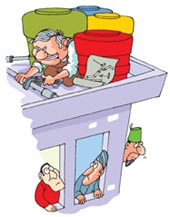 The controversy embroiling India's mega-plan to link its Himalayan rivers with those in the peninsular region by 2016 has now spilled over to Nepal, Bangladesh and Bhutan. Although they have not as yet raised any questions officially, resentment is brewing in these neighbouring countries.

This was apparent at a three-day meeting in Hyderabad, organised by the Water Supply and Sanitation Collaborative Council of Geneva and hosted by the International Crop Research Institute for the Semi-Arid Tropics. "Nepal feels it should have been included in the feasibility discussions regardless of how preliminary these might be," asserted Suvecha Pant of the Nepalese daily Kathmandu Post, while participating in the conference. Mostafa Kamal Mazumdar of Bangladesh's New Nation expressed apprehension: "The Sunderbans wetlands, a World Heritage site, are already threatened by the reduced flow into the mangroves due to barraging of the Ganga at Farrakka in West Bengal."

Water expert Jayanto Bandyopadhyay of the Centre for Development and Environment Policy, Indian Institute of Management, Kolkata, wondered why these two countries as well as Bhutan were not being involved in the project right from its inception. It may be noted that many of the 37 rivers proposed to be interlinked are fed by tributaries originating in Nepal and Bhutan. Water from Nepal's main river systems of Koshi, Gandaki, Mahakali and Karnali will be channelled to the drought-struck parts of northern India. Furthermore, there are plans of constructing dams near the Nepal border.

The conference also ignited afresh the internal debate over the grandiose scheme's pros and cons. While supporters highlighted positives like interlinking canal systems that would provide water for drinking and irrigation besides generating power, critics voiced concern that the likely submergence of vast forest tracts could disrupt wildlife, displace communities, and adversely affect water quality and microclimatic conditions. Chetan Pandit, an official in India's Union ministry of water resources, struck an optimistic note: "There will be more food for the poor, more irrigation potential -- especially for marginalized subsistence farmers -- and employment generation."

But not everyone quite agreed with him, especially journalists, non-governmental organisations and academics. "None of the feasibility and impact studies on this gigantic project have been put in the public domain," noted Bandyopadhyay. He called the government's resolve not to permit any discussion on the matter a "threat to science". According to him, the project was being implemented without an adequate study of Himalayan glaciers.

Interestingly, many similar river-linking projects are now being reversed all over the world. In the us, for instance, about 100 dams were removed recently to restore their rivers. The loss of over 60 per cent of the Aral Sea and its excessive salinity was also a result of two rivers in the erstwhile Soviet Union being diverted.

But all this has seemingly failed to alter the opinion of India's policymakers, with the Union government forming a task force committee to implement the project. And the Suresh Prabhu-led committee busy giving shape to a plan which, many believe, doesn't hold water.