Rise of the mutants

WHEN the reactors at the Fukushima Daiichi nuclear power plant malfunctioned after the devastating tsunami in March last year, it left the scientific community jittery over the noxious effects the radiations might have on the biodiversity in Japan, and beyond. It seems the fears were not unfounded.

Researchers at the University of Ryukyus, Okinawa, have found that pale grass blue butterflies, Zizeeria maha, in regions near the nuclear plant are undergoing harmful mutations. In Motomiya, Iwaki, the mutations are higher in number. The study was published in the journal Scientific Reports on August 9.

It states that some butterflies have developed abnormalities like dented eyes, stunted and wrinkled wings, change in wing size and spot patterns and a misshapen palpus, a sensory organ the insect also uses for feeding. 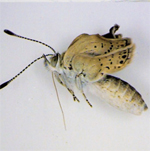 Researchers say such mutant butterflies are more common near the nuclear plant than in areas away from it. They conducted a short-term survey. “Assessments of the long-term effect of the radiation need to be monitored,” says Joji Otaki, co-author of the study.

When researchers mated abnormal butterflies with the healthy ones, the result was alarming. The offsprings exhibited more pronounced physical anomalies than their parents. This clearly shows that the genetic damage caused by nuclear radiation is inherited by subsequent generations of butterflies and might cause permanent physiological anomalies in the species.

Spiders, dragonflies, damselflies, praying mantis, ants and small lizards prey on the adults of this species while wasps and bugs consume their eggs and larvae. The researchers are concerned about the effects these mutant butterflies might have on these predators connected to them via the food chain.

Krushnamegh Kunte, a Ramanujan fellow and faculty member at the National Centre for Biological Sciences, Bengaluru, says this is difficult to predict. “The research paper seems to suggest that the effects observed are mostly at genetic and developmental levels. This alone is unlikely to affect the predators,” he points out.

The implications of the radiations in human beings are unknown as yet but a recent study published in Journal of the American Medical Association stated that residents of Minamisoma, a town near the Fukushima nuclear plant, were still exposed to radioactive cesium six months after the disaster.