River jordan on the other side

Their recent patch-up was heartening, but Israel's water supply to a parched Jordan is a frustrating dribble 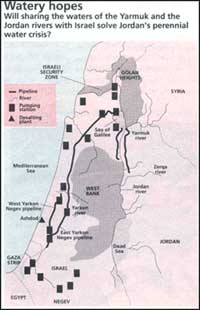 Although a great deal of hype surrounds the Israel-Jordan peace treaty signed in mid-October envisaging cooperation in many areas, adequate water supply still seems a distant mirage for Jordan. With fast dwindling underground water resources and stringent water rationing, the only straws which Jordan can clutch at is, Israel's commitment to divert 50 million cubic water annually to Jordan. The prospect of constructing dams on the Yarmuk and Jordan rivers, though agreed upon by both, will only materialise at a later stage.

International experts seem sceptical about such half measures to alleviate Jordan's perennial water crisis. Last year, a comprehensive report published with the aid of Germany's Friedrich Ebert Institute concluded even if the level of irrigation is maintained and water distribution optimised, the country will exhaust its entire renewable and "fossil" (ancient underground) water resources by the century-end.

Water sharing arrangements between Jordan and its Middle East neighbours too, are fraught with difficulties. According to Jordan, both Israel and Syria have restricted its access to the Jordan and the Yarmuk river water. Of an annual allotment of 477 million cubic metres a year envisaged in American-sponsored proposals in 1953, Jordan receives no water from the Jordan river now. It recieved a meagre 100 million cubic metres from the Yarmuk. "Everybody in this region is short of water. The real problem is not shortage which can be dealt with; it is that people are feeling that they have not got their fair share," maintains Elias Salameh, professor of hydrology at the University of Jordan and a co-author of the water report.

Experts like Salameh believe that the solution lies in changes in water consumption by the biggest water guzzlers -- Jordan's cultivators. With only 6 per cent arable land, the Jordanian government has subsidised water use by farmers to boost domestic food production. Much of the irrigation water is wasted because, unlike domestic and industrial waste water, it is not recycled but just evaporates.

Various options considered to ease Jordan's water crisis are: desalinization plants, a canal from the Red Sea to the Dead Sea, and water pipelines from Turkey and the Euphrates to the Levant. The most cost effective solution, says Salameh, is desalinization which could be achieved at a reasonble cost of around us $489 million annually.