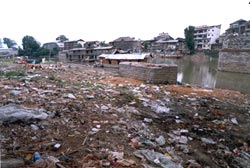 jhelum river -- the lifeline of Kashmir -- is in a state of advanced decay. Shrinking at an alarming rate, the waterbody is mired in pollution as well. As a damage control measure, the Jammu and Kashmir (j&k) government has come up with a mini eco-restoration project.

The state government unveiled the programme, and it has now been included in the Prime Minister's eco-restoration scheme for j&k. The five-year project involves the use of soil conservation techniques and watershed management in the catchment areas to prevent further degradation. State environment minister Ghulam Mohi-ud-Din Sofi disclosed that the total cost of the project would work out to Rs 30 crore.

The 241-km-long Jhelum is the backbone of the state's economy. But over a period, several encroachments have sprung up on the banks of the river. Worse still, a survey conducted by the j&k State Pollution Control Board (jkpcb) has brought to the fore some alarming facts about the quality of its water. "The chemical oxygen demand (cod) is beyond permissible limits along a vast stretch," reveals Bilquees Ara, senior scientific officer with jkpcb. The turbidity levels have also been found to be high in most places.

According to the jkpcb, sewage and effluents dumped into the river are the main sources of pollution. Zulfikar Ahmad of the Al-Sarwat Students' Coordination for Environment Planning, a non-governmental organisation, blames the state government for things having come to such a pass. "Civil society groups must be involved in the cleaning process," stresses Ahmad.