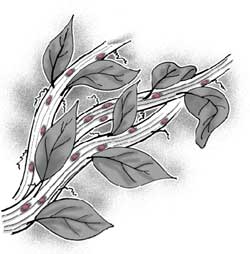 how does sunlight falling on one leaf of a plant influence the flowering of a distant bud? Scientists have long believed that it is due to the movement of small hormone molecules. Research on the pumpkin has now revealed that plants could be coordinating their growth and responses to the environment by ferrying genetic messengers along an 'information superhighway'.

Roberto Ruiz-Medrano and his team at the University of California at Davis, usa , say that important messages are also carried by molecules larger than previously thought -- and they are not just proteins but also messenger rna s (m rna s). The researchers looked for m rna s in the vascular tubes of pumpkin plants called phloem. They found that m rna s, such as one called c m nacp , encode proteins that influence the development of the plant ( New Scientist , Vol 164, No 2207).

The researchers grafted a cutting from a cucumber plant on to the stem of the pumpkin plant to ascertain the movement of m rna s through the phloem. Cucumbers do not produce c m nacp . When the scientists found this particular rna in the cucumber cutting, they knew that c m nacp was travelling in the phloem. On further testing, the researchers found that all m rna s do not move in the same way. Some never get into the phloem, others cover short distances, while some others travel right up to the growing tips of plants.

William Lucas, the leader of the research team, deducted that plants use m rna s to coordinate global responses -- travelling rna s might switch genes on or off, thereby orchestrating cellular activity. "I think we will find some pretty damn novel information-processing molecules. One cannot even begin to imagine how much it may open up the field of signalling," says Lucas.

The real purpose of the m rna transport is not very clear at present, says Robert Singer of the Albert Einstein College of Medicine in New York, usa , who is himself an expert in m rna movement. "The question is: does it really have any significance or physiological impact?" he asks. Sarah Hake of the University of California in Berkeley, usa , points out that the answers may lie in finding out what happens when rna s do not move. But regardless of the importance of the m rna traffic, biologists will surely have to refresh their understanding of plant genes.