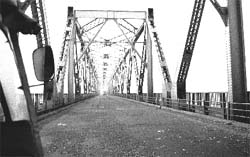 wildlife experts in Assam say that construction of roads and heavy traffic movement through the jungles of Assam is affecting the flora and fauna of the region. They have urged the government to preserve the eco-system.

H K Choudhury of the Wildlife Areas Development and Welfare Trust says that the increasing traffic along the Mathanbguri-Panbang road on the border of Manas National Park is the most affected. The park is a world heritage site and is famous for its tigers besides the endangered one-horned rhinoceros and other animals. "There have been many instances in the past when several animals were crushed to death under the wheels, especially at night," says Choudhury.

The director of the park, Rajendra Agarwalla says that the road is proving to be an environmental hazard. Officials of the state Wildlife Department also say that the national highway which passes through the fringes of the Kaziranga National Park in Assam also causes undue harassment to animals.