A common plant growing in the wild in Garhwal, basingu is traded both as a medicinal herb and vegetable 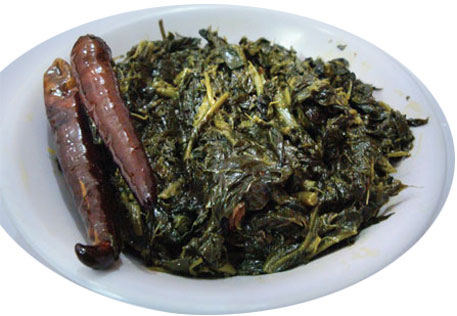 Roadside greenery in Garhwal always mesmerises me. It can be eaten as well, as I discovered during a visit to my aunt’s place at Bah Bazar in Deoprayag, Uttarakhand.

The green-white flowers and twigs, a common sight on roadsides and in open areas during winters, can be served as a vegetable, rare and delicious. Basinguka sabziwith finger millet chapattiwas my first day’s breakfast. Adathodavasica is called basinga or basingu in Garhwal and, arooshor adushin Hindi. The best collection time for its leaves and inflorescence (cluster of flowers) is December to February.

People in Garhwal have always depended on wild sources for food because of their remote location, where organised markets are absent. These seasonal vegetables are not sold in the market because of their limited availability. Instead, people mostly barter the plants for other daily items of use.

I noticed an old lady with a bagful of green leafy edibles coming to my aunt’s place every third day to barter almost a kilo of basingu leaves for a bowl of rice. I was told she goes to almost seven houses every visit to barter the wild vegetables and wild fruits based on the season. It is her livelihood.

As my aunt told me, “Everybody at home, especially the elders, are fond of this vegetable because of the warmth it gives to the body during winters.” The medicinal properties of basingu have been known in India and several other countries for thousands of years. It is heavily traded for medicinal purposes by pharmaceutical industries and is prominently used in Ayurvedic, Siddha and Unani medicines. Fresh leaves and inflorescence of the plant are traded in herb markets of Ramnagar and Haldwani in Uttarakhand and Khari Baoli in Delhi. Its expectorant property is used in the indigenous system of medicine to cure chest infections. Leaves of the bitter-tasting basingu plant activate the digestive enzyme trypsin and are also fed to children suffering from small pox and chicken pox.

The bitterness of the plant can be removed by boiling it and then keeping it in a bamboo basket under running water.

Though the plant is common in Garhwal, according to the Convention on International Trade in Endangered Species of Wild Flora and Fauna (CITES), it is threatened by overexploitation for ayurvedic and homoeopathic medicines.