Roasted peanuts cause more allergic reaction than raw ones 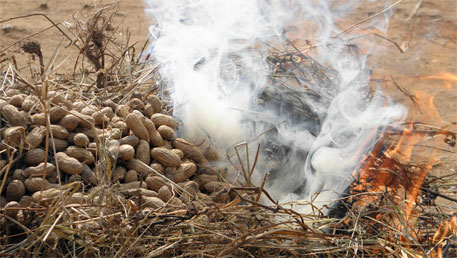 A study conducted by scientists at Oxford University shows that dry roasted peanuts have a greater propensity to cause allergy as compared to raw peanuts. This is because the high temperature brings about certain chemical changes when peanuts are roasted, which are immediately recognised by the body’s immune system and leads to an allergic reaction.

This study explains why peanut allergy is more common in western countries than eastern countries where peanuts are mostly consumed raw. Peanut allergy is especially prevalent in countries like the US and Britain among children. It is usually lifelong. The allergy is caused not just by eating peanuts, but also by touch or exposure to its residue.There are many types of allergic reactions to peanuts; these include diarrhoea, vomiting, cough, wheezing and shortness of breath, itchy throat and tongue, itchy skin or rash swollen lips and throat runny or blocked nose sore, and red and itchy eyes. These are relatively less severe symptoms of food allergy unlike anaphylaxis, a condition which affects breathing and blood pressure.

For conducting the research, the scientists took protein extracts from dry roasted peanuts and raw peanuts. They introduced the peanut proteins to mice by injecting them under the skin, applying to broken skin and directly introducing into the stomach. The immune responses of the mice were measured. Mice that were given dry roasted peanuts demonstrated greater level of immune responses to peanuts as compared to mice that were given proteins from raw peanuts.  The mice that had been initially exposed to dry roasted peanuts generated greatly increased immune responses to peanuts, compared to mice that had been exposed to raw peanut proteins. A high activity of the immune system is indicative of greater level of allergic reaction.

The study is published in the Journal of Allergy and Clinical Immunology on September 21.

First author Amin Moghaddam of Oxford University says that allergies are driven by multiple factors such as family genetics and exposure to environmental triggers. “In the case of peanut allergy, we think we may have discovered an environmental trigger in the way that peanuts are processed by high-temperature roasting,” says Moghaddam.

“We know that children in families with other allergies are more likely to develop peanut allergy. However, our research is at an early stage and we think that it would be premature to avoid roasted peanuts and their products until further work has been carried out to confirm this result,” said Quentin Sattentau, the lead researcher of the study. He added : “We think we have identified the chemical modifications involved in triggering an allergic response to peanuts, and are currently exploring methods that are food industry-friendly to eliminate these groups.”