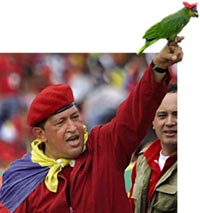 In a recent recall referendum the people of Venezuela reaffirmed their faith in President Hugo Chavez. As a token of gratitude Chavez vowed to step up certain agricultural reforms. However, the "revolutionary" social policy, like many others before it, promises to generate more controversy than good.

The government plans to enforce a 2001 land law that allows it to either tax or seize unused land. "We are going after the idle land and will put it to work," said Chavez. He has ordered his military commanders to investigate latifundios or rural property larger than 4,999 hectares of good, but idle land and see how best to utilise it. The redistribution programme also allows for some of it to be given over to peasant cooperatives, which will get state aid to farm the land.

While Chavez's supports are hailing him as a champion of the poor, the Venezuelan opposition coalition has accused Chavez's government of being the protector of robbers. The former army paratrooper burst back into the political scene in 1998, promising to transform Venezuela. But till date Chavez has been unable to bridge the huge gap between the country's rich and poor. Instead, he has alienated the country's traditional business and political elite with his combative rhetoric. According to a 1998 census, 60 per cent of Venezuela's farmland of nearly 179,200 square kilometers was owned by less than 1 per cent of the population. As per the census, 90 per cent of farmland given to peasants in a 1960 reform programme reverted to large landholders.