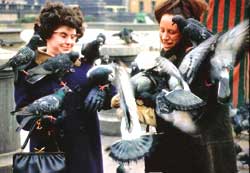 the row over licensing of avian flu drug Tamiflu, has given a glimpse of how the issue of access to drugs will be handled, in future public health emergencies.

The Swiss pharma major, Roche, which has properietory rights over the drugs, had finally agreed to talk with generic drug manufacturers about producing a cheap version of Tamiflu -- one of the two known avian flu treatments. But on October 26, 2005, secretary of the Union ministry of health revealed that Roche had never applied for a patent in India. This gives Indian generic manufacturers a green signal to produce with or without Roche. This also brings relief to many developing nations: many without the capacity to develop their own generics were looking to import it from India.

cipla started a patent versus public health debate, on October 13, 2005, when the Indian pharmaceutical company announced that by January 2006, it would sell a cheap generic version of Tamiflu, to offset global shortage. Roche spokesperson, Terry Hurley, responded by saying that they would protect their property rights and "intended to remain the sole producer of Tamiflu".

cipla's plans could have embroiled the two companies in a legal battle, if Roche had applied for a patent in India. But Roche would not disclose its patent position then. "Not disclosing patent applications is a common tactic used by these manufacturers," said D G Shah, secretary general, Indian Pharmaceutical Manufacturers Alliance. It deters generic drug manufacturers from producing cheap alternatives. Roche has also not disclosed its production capacity of the drug, and had categorically refused to talk with generic manufacturers at that point.

Tamiflu is currently in short supply. Roche plans to double its capacity by the end of the year, and again by mid-2006, but this might not prove sufficient. us- based market research firm Verispan Ltd says that 87,000 Tamiflu prescriptions were made in the two months before October 7, 2005, compared to 13,000 in the same period last year.

Avian flu killed 30 people last year, and many fear a global pandemic if the virus mutates to a virulent form that can pass from human to human See box : Reality BitesCurrently, only infected animals can pass on the disease to humans.

Though the virus has affected mostly Southeast Asia, the European Union is contemplating a complete ban on imports of wild birds after a parrot died in quarantine in the uk, of a dangerous form of the virus (h5n1). Cases of less virulent forms of bird flu have already been found in Greece, Croatia and Sweden. The us government has stockpiled more than four million doses of anti-flu drug and plans to acquire 20 million more. Avian flu deaths have also been reported from Indonesia, Thailand, Cambodia and Vietnam.

A major concern about avian flu is that it can affect developed and developing countries alike. However, Leena Menghanay, India project manager, Doctors Without Borders' Campaign for Access to Essential Medicine, emphasises that access to a generic Tamiflu is especially crucial to developing countries. "People in developing countries are especially succeptable to the respiratory problems associated with the disease. Imagine the disaster, if an outbreak of Tamiflu happens in a developing country, on a large scale and only the expensive patented Tamiflu drugs were available." A ten-tablet course of Tamiflu costs us $60 though Roche claims it would reduce the price in the event of a pandemic.

On October 18, 2005, Roche finally agreed to enter into a discussion with governments and other manufacturers to produce Tamiflu. Soon after, India's largest pharmaceutical company Ranbaxy, said it had begun talks with Roche to license Tamiflu. However, the health secretary said that there was no need for it. "The secretary's comment is wonderful news" said Shah, as it means no permission is needed to start production. Generic manufacturers still have a difficult road ahead. There are concerns that the drug is difficult to manufacture as it involves a complicated ten step process. Further, there are also supply constraints for raw materials. Roche's help might still be needed to tackle the crisis.