The enigma behind the world. of asteroids could be unravelled once and for all with NASAs recent launch of a search probe 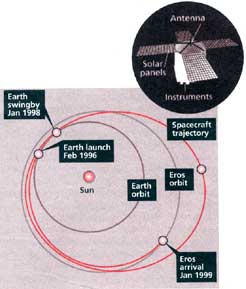 IN THE run up to knowing more about outer space and its intricate components, especially the asteroids - rocky leftovers of the birth of the solar system 4.6 billion years ago - the National Aeronautics and Space Administration (NASA) successfully launched the first ever space probe to orbit an asteroid on February 17. Called NEAR for Near Earth Asteroid Rendezvous, it will journey two billion kin to reach the asteroid Eros, named after the Greek god of love, that is circling the sun relatively close to the earth. Eros is the second largest of the nearly 250 known asteroids that approach the earth.

The car-sized spacecraft was built on a shoe-string budget of us $17 million at the Johns Hopkins University Applied Physics Laboratory in Laurel, Maryland. It will take three years to reach the designated orbital path around Eros and will be manoeuvered by NASA's jet Propulsion Laboratory in Pasadena.

The spacecraft will swing past earth in January- 1998 and will change its orbital plane to match that of Eros. The probe's first encounter with Eros will take place in February 1999, and in March J999, it is expected to reach the optimal orbital distance of 30-50 kni to conduct its study. Hovering close to the target for almost an,entir 'e year, NEAR will collect data on the asteroid's mineral content with the help of special cameras installed in it. Scientists also hope to obtain information on the geology of the asteroid, whether it has a moon/ 'moons, and the precise density of the asteroid. The mission will terminate in December that year when it will be commanded to either crash-land on Eros or will be ejected out of the asteroid's orbit.

According to project scientist, Andrew Cheng of the Johns Hopkins University, the data on mineralogy and chemistry of Eros will offer scientists "the first really good, close-up look at an object which may preserve materials dating all the way back to the origins of our solar system, to the time when the planets, including earth, were first forming." It is not known whether Eros, which was first sighted in 1898 by scientists in Germany and France, is a primitive celestial body or a i@hunk of a ruptured former planef.'The asteroids are found in abundance,betvieen the orbits of Mars and Jupiter in an asteroid belt which is between 10- 1,000 km thick.

The asteroid study will also help to find a connection between asteroids and meteorites, the small fragments of stone and metal which burn and plummet onto the earth's surface. Theories have it that meteorites originate from asteroids, but as yet no match has been found. But to be parent material for the meteorites, the asteroids would have to escape the asteroid belt and cross the earth's orbit. How do they. manage that? Scientists believe that within the asteroid belt, bodies sometimes collide With each other, scattering asteroid fragments. into a frenzied state of motion wher they are further confused by theA gravitational pull of the surrounding planets. The existent chaos acts as an escape hatch, wherein the asteroids sneak away, and end up crossing the earth's orbit. Sometimes they even faRinto the earth's atmosphere streaking down in what is known as shooting stars.

According to results of computer stimulations conducted by Patrick Michel and Christiane Froeschle of the Nice Observatory and Paolo Farinella at the University of Pisa, Italy in 1995, there is a 50-50 chance that Eros might crash-land on earth, thus ending its existence. But the - catastrophe is expected to occur many million years later. The impact will, however, be greater than the one which is thought to have ended the dinosaur reign 65 million years ago.

Studies have revealed that most meteorites belong to the chondrite family of rocks which are rich in metal content and they contain innumerable tiny spheres - chondrules, made up of silica-group minerals. These silica-rich a$teroids are termed s-type asteroids which abound in the inner third region of the asteroid belt where the chief escape hatches to earth are found.

On conducting light spectrum analysis on meteorite fragments and asteroid s, scientists found that they did not match. This, they theorised, was because in the course of its patb toward the earth the, meteorite underwent certain changes, which an asteroid does not. Tests were conducted at the Vernadsky Institute in Moscow, where; ordinary chondritic meteorite was crushed and zapped with lasers to simulate the effect of tiny meteor bombardments. The results of spectral analysis of the meteorite was found to match that of an s-type asteroid. Scientists hope their hypothesis will be proved correct and that the NEAR mission will solve the puzzling connection between the asteroid and the meteorites once and for all.