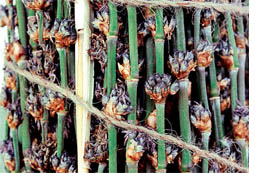 Mizoram has recently sought central aid to check the fallout of an increasing rodent population in the state. The state disaster management and rehabilitation department (dmrd) recently submitted a memorandum to an inter-ministerial central team led by u k s Chauhan, joint secretary of agriculture.

Following the gregarious flowering of bamboo, locally known as Mautam, there was a rapid increase in rodent population. The rodents which feed on the flowers have destroyed half the rice crops this year. Crops like maize, brinjals, bananas and passion fruit have been widely hit. The population of other animals such as wild boars, jungle fowls and insect pests too have also increased.

An official estimate shows that more than 200,000 rats were killed in Champai and Serchhip districts. The state officials maintain that the situation is as grave as a famine.
K Riachho, secretary of dmrd, says the state sought additional quantities of rice at above poverty level rates from the union government. It also sought aid of Rs 35.62 crore to implement food-for-work programmes among farmers. "There are 205,528 families that hold food ration cards in the state. To provide food to all, we need an additional 4,000 tonnes of rice," he adds. The state government claims it has spent more than Rs 62 crore of the Rs 67.7 crore relief fund provided by the centre in 2006. It has asked the centre to release Rs 69.7 crore set apart for the state this year, and another Rs 38.2 crore to help the affected farmers.

The state agricultural department estimates that 15,453 hectare (ha) of cropped land has already been affected. It anticipates that the rodent menace will claim 80 per cent of the crop next year. The expected yield for the rice crop in 2006 was 26,279 tonnes, but the actual yield was only 13,658 tonnes. The crop loss in districts ranged between 40 per cent and 80 per cent. Kolasib was the worst affected with a crop loss of over 80.17 per cent.
Bamboo from a single seed source flowers rapidly, producing clusters of small mango-shaped seeds. The plant dies after it flowers and the seeds are dispensed. Rodents feed on these high protein seeds and multiply quickly.

Mizoram's last confrontation with collective flowering of bamboo was in 1958. Today, about 6,446 sq km of bamboo forests cover about 31 per cent of the state. Of this, more than 90 per cent is covered by melocana baccifera species of bamboo, which has been flowering since 2003. Official statistics show that 5,100 sq km is covered by bamboo. By December 2005, first gregarious bamboo flowering began in about 10 ha in Champai district. Dendrocalamus hamiltonii, another species of bamboo, also began flowering at the same time, attracting a slew of animals and aggravating problems.
While the government is seeking central aid, civil society 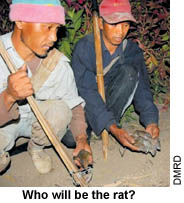 groups have questioned the efficacy of the measures taken by the administration to help farmers. A C Zonunmawia, director of the Centre for Environment Protection in Aizwal, says the state government has failed in systematically carrying out the measures to check the problems. "Various departments are undertaking relief measures to improve livelihood of farmers in the state. These plans are too short to meet the crisis which was stemmed out of a poor monitoring and evaluation mechanism," he says, adding that the action plans often lacked participation of all stakeholders.

Former chief secretary of Mizoram, Michael Lalmanzuala, says most of the relief schemes have been hijacked by a nexus between contractors, politicians and bureaucrats."One of the relief schemes was, for example, supposed to introduce turmeric as an alternative crop during Mautam. Rats don't attack the plant. Many of the 50 kg bags did, in fact, contained just 13 kg of turmeric rhizomes," he reveals. Many, like Lalmanzuala, suggest that only a clear and comprehensive assistance system can save the state from the rodent trap.