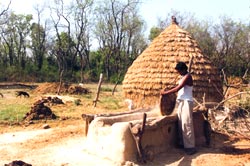 in a district where not toting a double-barrelled gun or revolver is considered a violation of the dress code, the word 'fraud' was redefined with astounding audacity. Without firing a single shot (quite uncommon in this trigger-happy territory), three junior officials of Bijnor defrauded the government of Rs 100 crore worth of property by creating a fictitious village.

The three -- Mahadev Malviya, lekhpal (field operative) in the revenue department, assistant registrar Ghasita Singh and Mahmood Ahmed, amin in the irrigation department -- were arrested in April and denied bail by the district sessions judge on May 17. They have been accused of forging land records in their offices, creating a fake village called Rani Nangal on prime forestland in the Nagina block of Bijnor district, transferring ownership of village property to their families and selling off the resource-rich forest on the tract for a song.

The three hatched a plot and began executing it in 1989. They duped the local administration, forged documents and perpetrated the crime right under the nose of the district officials for more than a decade. In the process, they usurped rich cultivable land and prime shisham, khair and sagwan forests that were part of Corbett Tiger Reserve before Uttaranchal was carved out of Uttar Pradesh (up). The forestland today falls in the Rani Nangal block of Amangarh forest range in up.

To be sure, the law did catch up with them. But not before they had struck a deal worth Rs 1.2 crore for a part of the forest with a former member of the legislative council (mlc) of up. Fortunately, the administration was able to prevent illegal tree-felling in the area and register a case against them.

Mahadev Malviya is alleged to have masterminded the crime. The reports of the district magistrate (dm) mention that he used many aliases to run his operation, taking advantage of the confusion generated by various land settlements in the state in the 19th and 20th centuries and swindling government property.
The state gazettes show that Rani Nangal existed as a revenue village at the time of the eleventh land settlement of 1859. Thereafter, numerous settlements were made to decide the legal status of the land. But when the Indian Forest Act of 1927 was promulgated, about 600.55 hectares (ha) of the village was declared a block of reserved forest in August 1928. Only a 60.70 ha tract, called Rani Nangal Chak, was left unreserved. This, too, was later co-opted as reserved forest under the twelfth settlement in the state gazette in February 1939. The entire village, therefore, became the property of the forest department (fd) by 1939.

In 1950 the up Zamindari Abolition and Land Reforms Act came into force, under which land holdings and their legal ownership were redistributed. V K Singh, sub-divisional magistrate (sdm), Najibabad, says: "At that time, new possession documents (khatauni in legal parlance) of all revenue land were prepared either under the act or otherwise. But Rani Nangal forest block was excluded from this exercise by the then government." Consequently, the area retained its forestland status. It is noteworthy that while individuals can have title to revenue land, only the government has the right to own forestland.

It was a development which took place way back in 1961 that facilitated the crime. The irrigation department built a dam on Pilli river, which led to the submergence of nearby villages. To rehabilitate the oustees, the government transferred 142 ha of land from the forest block to the irrigation department. Even then this tract continued to retain the legal status of forestland. Permission for land-use change from the Union ministry of environment and forests -- a pre-requisite for diverting forestland to any other purpose -- was not obtained. Displaced families from three villages were resettled in the Rani Nangal block. But as elsewhere in the country, here too the process took several years. It was this systemic shortcoming that the trio allegedly tried to cash in on.

Malviya conspired with Ahmed more than a decade ago to file false claims in the names of their family and relatives for compensation. They contended that their land had also been submerged in the Pilli dam reservoir, but they had not been rehabilitated. According to the first information report (fir) filed against them in Nagina thana, the assistant registrar kanoonga -- who verifies all claims or land rights -- colluded with the two to substantiate their claims. They also forged letters of the executive engineer of the irrigation department to lend credibility to their plea. The then sdm of Nagina passed an order on the basis of the papers presented before him, stating that the claimants had the right to be resettled. A report of the dm filed in the court says this was done in contravention of clearly-laid-down regulations.

Armed with legal documents, Malviya reportedly went on to forge land possession papers. He fudged khatauni No 1396 to 1401F and got them placed in the record room with the help of Ghasita Singh. They also made false entries in other documents. One crucial document that they tampered with was register R-57 that records the details and number of villages in each block. This document is updated once in five years. The 1986 register records the existence of Rani Nangal village with an ink and in a hand different from those used for all other entries, the dm's report mentions. Thus with the stroke of a pen, a fictitious village is said to have been added to the legally existing 713. The name of Rani Nangal revenue village was carried over to the 1991 register. Following this, it was listed as a village in the Nagina block of Bijnor in the 1995 state gazette.

Once they had bestowed property rights upon their family members, the three went ahead with the next step of their plan. They decided to sell the precious trees growing on the plots. The trio reportedly contracted with an ex-mlc to sell trees growing on certain plots for which they had faked ownership. A deal was struck for Rs 1.2 crore. The fir filed in the case reveals that they took Rs 11.50 lakh from the former legislator.


It is at this stage that their plan came unstuck. This is also when the trail of events gets a bit hazy. The local administration claims it was spurred into action by an enquiry made by the divisional commissioner against Malviya. Some petitioners, who are since untraceable, had apparently filed complaints against his antecedents with his seniors. This prompted the commissioner to ask for a status report on a visit to the district.

But fd officials claim otherwise. C P Singh, sub-divisional officer, Bijnor, says, "When the ex-mlc approached the fd for permission to take out timber, it was realised that the trees and land in question were a part of Uttar Pradesh's portion of the tiger sanctuary. Jolted by the enormity of the scandal, the fd as well as the revenue department began to work in tandem."

These contrasting versions notwithstanding, on March 23 the then dm of Bijnor, Markande Singh, formed an inquiry committee under V K Singh. The panel included officials of the irrigation, revenue and forest departments. It submitted a detailed 86-page report to the dm on April 12 on the basis of which he asked the three concerned departments to file firs. The three accused were then remanded in custody. The case now is being heard in the district sessions court.


The story gets more sordid. The dm's report, submitted in the court, clearly indicts other officers like the then tehsildar and sdm also for connivance. A senior local government official says on condition of anonymity: "The fraud could not have been perpetrated without the collusion of senior officials. They too could soon be brought to book."

The defence lawyer for the accused, Anil Chaudhry, puts a poser: "How can they have committed a fraud when the then sdm states in his order that the people mentioned in the khatauni had legitimate rights? It is the malevolence of V K Singh, against whom my client had filed complaints when he was sdm, Nagina." V K Singh and others in the government counter such allegations, alleging that Malviya has always tried to divert attention by making bogus complaints against his seniors. They cite earlier departmental enquiries into his actions to substantiate their allegation.

In fact, the fd and revenue department are already fighting a slew of cases in various courts, including the Allahabad High Court. This litigation pertains to rights over either disputed land or trees growing on the land. Local sources claim that the ex-mlc, who has since turned a government approver, is also a part of the racket. Officials in the fd allege that he had tried to offer bribe to get the trees felled on the basis of forged papers but the deal had fallen through, leading to the fir.

Sources point to increasing political pressure on the administration to go slow in the case. Apparently this is not the only instance of fraud for which the three are being held responsible. Nor are they the only ones to have encroached on land or defrauded the government of its property (see box: Compounding the crime).

The problem seems to be endemic in the region. M U Khan, ranger of Amangarh range where the disputed forest block falls, says, "This is one case that has come to light. Actually, this forest has slowly become a paradise for encroachers."