Anti-HIV drugs can mutate the genes of an embryo 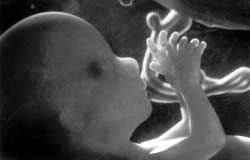 a generic drug used for preventing the transmission of the aids virus from an expectant mother to her child may cause genetic mutation in the offspring. These are the findings of researchers from the New York state department of health -- the organisation that provides the drug called nucleoside reverse transcriptase inhibitors (nrti).

"We have confirmed that the risk is more than theoretical," says Vernon Walker, one of the researchers formerly working at the department. Currently women are warned only of a theoretical risk. But studies conducted on rats show that offsprings exposed to nrtis as embryos can develop nrti-induced cancers after middle age ( www.newscientist.com , February 20, 2001).

According to Walker, different combinations of nrtis have different mutagenic effects. nrtis, such as azt, were the first drugs given as anti-retroviral agents and they still remain the backbone of aids therapies. The drug works by inserting itself into the dna of the hiv virus, thereby, preventing the production of a specific enzyme needed for the replication of the virus. But the drug can also insert itself into the genes of the patient and of their unborn child.

During their study, the researchers compared 71 new-born rats which had been exposed in the womb to azt alone or the combination of the drug with 3 tc, another kind of nrti. They analysed umbilical cord lymphocyte cells for two genes and found significantly higher genotoxic and mutagenic effects in the exposed babies. Mutations were found in more babies treated with the azt-3 tc combination than with azt alone -- 83 per cent versus 60 per cent. The combination also resulted in a quadrupled level of mutations compared to the single drug. The mutations in the nuclear dna of the newborns were equivalent to the mutations that can build up over time in young adults, says Walker.

According to him, the finding should not be considered alarming keeping in mind the fact that nrtis have been successful in reducing transmission of hiv to babies, lowering the rate from about 25 per cent to eight per cent, and in some cases just two per cent. "The number of children affected by nrtis is much less than the number of the children prevented from getting a fatal disease," he said.

But experts like Stephanie Bird from the Online Ethics Centre at the Massachusetts Institute of Technology, usa, say that the long-term side effects must be watched. According to George Annas, a legal and ethical expert from Boston University School of Public Health, usa, good data is needed to allow informed choices. But if the data showed, for example, a one in 100 risk then it would be a difficult decision.