A mosquito brought down an empire that worlds' militaries couldn't 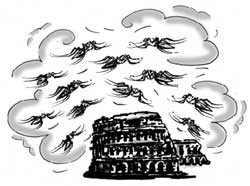 rome fell to a mosquito -- the anopheles mosquito that spreads malaria by carrying the parasitic protozoa. There has been lots of circumstantial evidence saying this. But a recent study has reaffirmed this belief. An analysis of the genetic material extracted from skeletons of Romans living in fifth century ad has revealed that they died of malaria.

The hypothesis that Romans suffered a malarial epidemic gained ground when, in 1990, excavation of an abandoned fifth century villa near Lugnano in Teverina, Italy, revealed a cemetery for infants. Nearly 50 children had died during a short period of few weeks during the summers of one particular year, showed research. Premature babies made up nearly 40 of them. The rapid succession in which the children had died suggested an epidemic.

Accounts of travellers, who passed through the region in the summer of 467 ad , described many inhabitants suffering from fever, chills, sweats and thirst -- all of them symptoms of malaria. The ancient writers such as Sidonius Apollonaris also wrote of the degrading environment in Rome in the fifth century. "We know that ports on the River Tiber, just down the road from the excavated villa, were silting up, being abandoned and turning marshy," says David Soren, University of Arizona who had led the team of archaeologists. The Romans used river Tiber to dump untreated sewage and garbage and created a perfect breeding ground for the mosquitoes. Incidentally the word malaria has originated from 'mala area' meaning 'bad air' in Latin. Soren also attributes the spread to a mutation in the pathogen during the period. This mutated pathogen caused the rapid spread of the disease, believed scientists.

Now, the hypothesis has been confirmed by biomolecular analysis. Robert Sallares and his student Susan Gomzi, both researchers at the department of biomolecular sciences, University of Manchester Institute of Science and Technology, England extracted dna from the bone marrow where Plasmodium falciparum, one of the four parasitic forms of the malarial protozoa, is known to attain high population. It was found that the polymerase chain reaction product, formed by replicating the dna extracted , was 98 per cent identical to the Plasmodium falciparum gene sequence. The presence of the plasmodial dna was confirmed only in one of the samples, which had been extracted from a three year old child. Though tests were carried out in around 40 available samples, results of only five children have been reported as only the older children could provide reliable results.