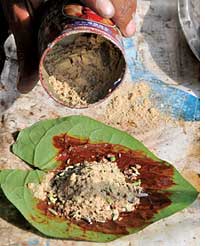 THE root of the licorice plant (mulethi in Hindi) is used to treat sore throat, ulcers and eczema. New research suggests it may have a greater use-prevent the growth of cancer of the colon, the last section of the digestive system.

Scientists found the compound that imparts the sweet taste to licorice, glycyrrhyzic acid (GA), prevents cancerous growth in the colon. Studies have found different compounds of licorice effective against cancer of the skin, prostrate and stomach but the mechanism of action was not known.

Colon cancer is one of the five deadliest forms of cancer in Western countries though its incidence in India is low. What triggers the disease is unknown. The only way to reduce colon cancer deaths is to prevent the growth of cancer cells. But the few drugs that can do this have severe side effects.

Aspirin and ibuprofen, prescribed as painkillers, are used in colon cancer treatment. They control the growth of cancer cells by suppressing the enzyme

), found in colon and kidneys. This in turn blocks the activity of another enzyme cyclooxygenase (cox-2). Controlling cox-2 by suppressing the enzyme prevented the development of cancerous polyps-bud-shaped tissues. Experiments on mice showed removing cox-2 completely prevented growth of polyps.

These painkillers cannot be used for long periods as they damage organs like the heart and the stomach. Using extract of the licorice plant (Glycyrrhiza glabra) is a safer way of suppressing

in the kidney suppressed the production of cox-2 in the organ. As colon is the only other organ that has a high presence of the enzymes, the team decided to study the role of the enzyme in the progress of colorectal cancer. "We postulated maybe one of the mechanisms by which the normal colon might prevent excessive expression (production) of cox-2 is through

," said one of the researchers, Raymond Harris, Department of Vanderbilt University School of Medicine, Tennessee, US. This study was published online in the March 23 issue of the Journal of Clinical Investigation.

The scientists used synthetic compounds and glycyrrhizic acid to understand the relation between the two enzymes. Cell cultures of intestinal lining of mice and human beings were treated separately with synthetic and natural compounds. The researchers found both suppressed the enzyme

The enzyme is present in high amounts only in the kidney and the colon and blocking its production with glycyrrhizic acid affects only these two organs. On the other hand, painkillers, steroids and other cox-2 inhibitors affect other organs too. Long term use of licorice does cause low blood potassium and increased blood pressure but these problems are inconsequential compared to those brought on by pain killers. "We didn't see side effects in the mice...but these side effects can easily be treated with a diuretic," said Harris.

Though glycyrrhizin provides a good lead for developing cancer drug, the researchers are trying to develop more specific compounds for controlling

. "We think we can make a better inhibitor that can better target cancerous tissues," said Ming-Zhi Zhang, the lead researchers. In their commentary accompanying the study, Paul M Stewart, University of Birmingham, London, and Stephen M Prescott, Oklahoma Medical Research Foundation, usa, said, "If the findings are confirmed, locally acting inhibitors of

, may be the way forward in colon cancer treatment."

The glycyrrhizic acid, found specifically in licorice plants, is 60 times sweeter than sugar. Licorice is used extensively in European candies.