Rotavirus vaccine on the anvil

But will it be effective against the huge number of strains found in India? 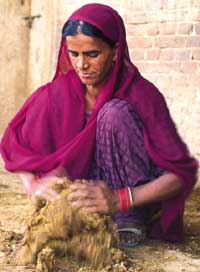 as human trials of the first Indian rotavirus (rv) vaccine move to an advanced stage, some scientists have expressed concern about its effectiveness in view of the constantly emerging strains of the virus. But developers of the candidate vaccine hope this vaccine will work against most, if not all, strains.

India accounts for one-fourth of the 6,00,000 deaths worldwide caused by rv. The virus is responsible for 20-70 per cent of hospitalised diarrhoeal cases globally and 20 per cent of diarrhoeal deaths. rv infections cause high mortality among infants below 2 years.

The biggest challenge to developing a vaccine against rv is their huge diversity. In a paper published in September 2005 issue of the Journal of Infectious Diseases (Vol 192, No s1), Gagandeep Kang of the Christian Medical College, Vellore in Tamil Nadu and co-authors said, "The remarkable diversity of rotaviruses circulating in India highlights the need for uniform, widespread surveillance for rotaviruses" before initiating immunisation programmes.

rv strains have been classified into seven groups. The most harmful rv s occur in Group a, which is sub-divided into categories such as g1, g2 and g3, depending on the way they react with the host's blood, or their serotype, in medical parlance. g serotypes 1-4 and 9 are found widely. g9 strains, believed to have originated in India in the 1990s, have now become the predominant rv variants in several nations.

A major reason for the presence of large number of rv strains in India (and in other Asian countries, too) is the proximity between people and animals such as cattle and pigs.

rv infects both humans and animals. But the extensive use of cow dung as manure and fuel makes it easy for bovine rv strains to mix with the human variants and evolve into new strains.

A review of rv -caused diarrhoea cases between 1996 and 2001 in 18 Indian cities by Kang and her team found certain strains earlier associated with dairy cattle in children hospitalised for treatment.

Among the first studies to establish the cause of zoonotic (animal-to-human) transmission and subsequent gene reassortment of animal rvs was that done by C Durga Rao and his team at the Bangalore-based Indian Institute of Science (iisc), about four years ago. Subsequently, a team of scientists led by Trailokyanath Naik at the Kolkata-based National Institute of Cholera and Enteric Diseases identified instances of pig-to-human transmission.

Monkeys may be another species contributing to new rv strains. Shobana D Kelkar of the National Institute of Virology (niv), Pune, and her student Pinki Awachat isolated a new strain when examining 500 tribal children in Jawhar in Thane district of Maharashtra in 2001. "This strain is very similar to one found in monkeys," said Kelkar, now retired from niv. The two authored a paper that appeared in the September 2005 issue of the Journal of Medical Virology (Vol 77, No 1).

India is conducting trials on two potential rv vaccines. While one is developed from a g9 strain identified and isolated by M K Bhan (now, secretary, department of biotechnology) when he was with the Delhi-based All India Institute of Medical Sciences, the other indigenous live rv vaccine candidate has come from the work done by Rao and his team at iisc. us scientists from the Centers of Disease Control and Prevention, Atlanta and Stanford University are collaborating in these vaccine studies respectively.

Of the two, the candidate vaccine developed by the Delhi group has been found to be more effective and is awaiting permission from the Drug Controller General of India to go for Phase- ii trials. Satisfactory completion of Phase ii trials will lead to Phase iii clinical trials involving 2,000 babies.

Bhan is optimistic about the new vaccine but says, "The final proof can only come from the Phase iii trials."

Meanwhile, Kang says the two rv vaccines available -- one developed by Glaxo Smithkline Biologicals and the other by Merck -- induce immunity against targeted strains in 80-100 per cent cases, but provide only 30 per cent protection against other rv strains.

Bhan disagrees, saying trials of Glaxo's Rotarix vaccine -- which is a single strain vaccine similar to the one Indian scientists are trying out -- yielded better results. The Glaxo vaccine was introduced in Mexico early this year.

If successful, the Indian vaccine will be several times cheaper than those manufactured by the pharmaceutical giants, which cost about us$40. "Not just India, the whole world will benefit from it," says Bhan.