Future of the ubiquitous personal computer is going to be spherical 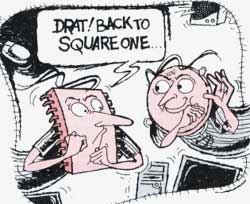 THE silicon chip may be no more if one American company has its way. Ball Semiconductor Inc (BSI) believes that in the future, silicon chips will be spherical. Microchips got their name because they are "chipped" off a flat silicon wafer upon which the circuits have been etched. But wafer processing is slow and expensive, says BSI. Instead, it says it is close to making computer processors in the form of silicon spheres.

BSI claims to have used conventional lithography to etch diodes onto the surface of a silicon sphere one milli-metre (mm) in diameter and is now working on ways to speed up and refine the process. The company, which has already raised us $52 million in financing, claims that it should be able to build a production line for us $100 million a tenth of the cost of a chip plant. Ram Ramamurthi, vice-president of research and development at BSI, which is based near Dallas in Texas, USA, says they will be able to make processors cheaply as its production assimilates the different processes involved, eliminating the need for vast, superclean rooms. BSI wants to do everything from making the silicon spheres to packaging the circuits in one continuous process. It hopes to be able to produce ball circuits in days rather than the weeks it typically takes to produce chips.

BSI is proposing to process the spheres in hermetically sealed quartz tubes two mm wide. The spheres will be shuttled through the various steps of the production process along these tubes and will emerge only when the circuits are being etched. Making the balls begins with molten pel/silicon granules being cooled and formed into spheres by being dropped down a long tube, just as musket balls were once made in "shot towers". Next, the circuitry is laid down using the same masking, etching and cleaning process that conventional chips go through. The big difference is that the circuits are etched onto a sphere rather than a flat surface, Ramamurthi says. BSI will be creating components one or two microns across rather than submicron sizes that some chip-makers are working with. The spheres will have bumps on their poles to act as contacts.