Monsanto folds up its GM wheat, for the time being 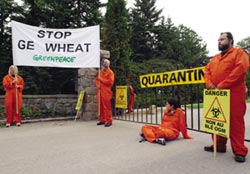 yielding to the pressure of wheat farmers of the us and Canada, agri-business giant Monsanto has deferred introducing the world's first genetically modified (gm) wheat. "The company is deferring all further efforts to introduce Roundup Ready wheat, until such time that other wheat biotechnology traits (for example, pesticide tolerance) are introduced. This decision was reached after a comprehensive review of Monsanto's research investment portfolio and extensive consultation with customers in the wheat industry," the company said in a press release on May 10, 2004. The Roundup Ready wheat is herbicide tolerant.

Breeding and field level research of Roundup Ready wheat would be discontinued. Monsanto's investment in wheat in 2003-04 was about us $5 million, less than 1 per cent of the company's research and development budget of us $500 million.

American and Canadian farmers have accepted other gm crops like canola, maize, cotton and soybean, which have been in cultivation for several years. But they fear that gm wheat won't get a market in Europe and Japan. They claim that the buyers from these countries have told them that consumers in these countries don't want gm wheat. Since it isn't possible in the us and Canada to segregate produce from gm crops from their non- gm counterparts, farmers dread that introduction of gm wheat might discourage foreign buyers from even buying non-gm wheat.

"I think Monsanto has made the absolutely best decision at this time," Patty Rosher, senior programme manager at the Canadian Wheat Board, one of the world's largest wheat exporters, told the Reuters news agency. The board pointed out that 87 per cent of its wheat buyers last year had asked for guarantees that the wheat was not gm. The board had threatened legal action against Monsanto if it didn't desist from its wheat programme. "It's a good decision in a second-best world: we don't like to see a company pull back on biotech research... but this product was not the right product," Rosher added.