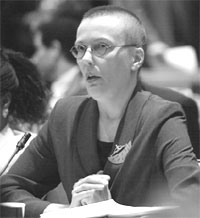 the Finnish parliament's go-ahead to the country's fifth nuclear plant has begun to take its toll, with environment minister Satu Hassi's putting in her papers.

The decision to build Finland's fifth nuclear reactor comes after a two-decade break. The first four plants were established in the 1970s. The proposal for a new plant was approved in January 2002 when 10 of the 18 ministers voted for the step, six voted against it while two abstained. In 1993, a similar decision was shelved when parliament voted 107-90 against the plan. However, this time around, the majority (107-92) voted in favour of the project.

European countries such as Sweden and Germany, which are opposed to nuclear power projects, have slammed Finland. The Finnish Association for Nature Conservation is of the view that parliament's decision would adversely affect the environment. Green Party president Osmo Soininvaara has, in fact, termed it as a loss for the "use of renewable energy sources and for the development of new energy-efficient technology". He feels that "the nuclear power plants will hit the electricity market and undermine the economic initiatives for increased use of renewables, energy saving and energy efficiency".

Finland currently imports more than 70 per cent of its energy supplies, mostly from Russia. The pro-nuclear lobby has been pointing out that natural gas would make Finland too dependent on Russia. Finland's energy industry federation, Finergy, justifies the action contending that nuclear energy is green in terms of emissions. It avers that the move would help the country meet its obligation to the Kyoto Protocol. Teollisuuden Voima Oy (tvo), the Finnish group that plans to construct the new reactor, has stated that electricity demand can be met only through nuclear reactors in order to avoid emission of greenhouse gases. It also claims that considering the huge domestic demand, only bio-energy and wind energy will not suffice.

However, the greens rubbish these arguments saying it is an illusion to assume that the climate problem could be solved by nuclear power. They point out that if nuclear energy use were to be doubled from the current seven per cent in the world during the next 25 years, one new nuclear plant would have to be built every week. This would produce equally immense safety risks and nuclear waste problems.