Row over uranium mining in Meghalaya 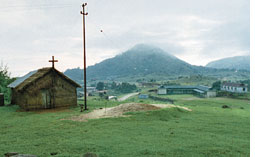 the Union Ministry of Environment and Forests (moef) cleared a controversial mining project by the Uranium Corporation of India Limited in Meghalaya last month, triggering fresh protests by local human rights and student groups in the state. The Rs 814 crore proposed Kylleng Pyndengso-hiong opencast uranium mining and processing project at Mawthabah in the West Khasi Hills district requires 351 hectares and will impact over 75 villages within a 20-km radius of the project area. The population of these 78 villages, according to the 2001 census, is 26,108.

The ministry cleared the project saying the area was primarily wasteland and "no ecologically sensitive area such as national park, wildlife sanctuary, biosphere reserve or tiger reserve is reported to be located in the core and buffer zone of the mine". Local organizations, like the Khasi Students Union and the Meghalaya People's Human Rights Council, have "strongly objected" to moef's clearance and threatened "further agitations". In June 2007, a public hearing on the project was held amid a general strike in the state and fierce opposition on health and environmental grounds by civil rights organizations and political groups (see 'Divided we mine' Down To Earth, July 15, 2007).

"We had submitted our contentions to the ministry earlier and requested several clarifications about the project, but never received an answer, so this comes as a surprise to us," said Dino Dympep of the Human Rights Council. "We don't know yet what form further protests will take, but right now we are considering appealing to the supreme court for a stay order, he said.

The moef go-ahead comes just before of the assembly elections in Meghalaya and chief minister D D Lapang has announced that the state government will seek the opinion of all political parties before making a decision on the project. The going won't be easy for the project given the unique land holding system in the Khasi Hills wherein all land is owned by either the local clan or individuals within the clan. Hence, all private and government deals will have to be ratified by these clans. Though the six villages where the project is scheduled to come up have agreed to give up their land, their assent is currently being contested at local courts.