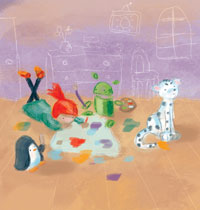 On January 23, 2014, Linda Liukas launched a project to raise US $10,000 to publish a children’s book called Hello Ruby, teaching kids the fundamentals of software programming. Four days later, and with 25 days of the campaign to go, the Helsinki-based software programming teacher has raised nearly double the amount with 4,300 backers.

The book will tell the story of Ruby—“a small girl with a huge imagination”— who meets penguins, a snow leopard and green robots (among other characters) on her adventures. It’s actually two books: an illustrated storybook with Ruby’s tale and an activity book that teaches early programming skills. Both are aimed at four to seven year olds. “I started drawing the pictures about three years ago, when I was working with more serious programming languages. It’s then that I created the character Ruby,” said Liukas.