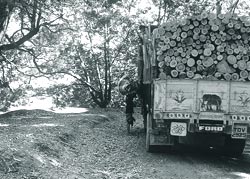 the Tamil Nadu (tn) government has lifted the ban on the inter-state movement of timber. The decision will facilitate the transport of timber from tn to other states. Further, even teak, rosewood and silver oak -- which are included in the scheduled list -- can now be moved out of tn, subject to permits being granted under the 1968 Timber Transit Rules. It is noteworthy that earlier the movement of timber that fell into this category was completely prohibited.

The recent order also allows neighbouring states to import timber through tn ports and transport them out of the state without permits. The state government hopes that this directive will boost the revenue of ports such as the one in Tuticorin.

Significantly, Tuticorin port has become one of the major hubs of timber import in south India. It scores over other ports because it has a provision for storing timber logs over long periods. That it is becoming a preferred destination is borne out by the fact that over 1.06 lakh tonnes of timber logs were handled at Tuticorin port between April and June 2003. As against this, only 56,000 tonnes of timber made its way to the port in the corresponding period last year.

The easing of the regulations is likely to see timber merchants from neighbouring states such as Kerala, Andhra Pradesh and Karnataka operating through Tuticorin. Previously, their activities were hampered because even if they imported wood through these ports, transporting it out of Tamil Nadu was not allowed since timber was covered by the Essential Commodities Act.

Officials opine that such an order was long overdue because imported timber shipments had the potential to cause a severe glut in the market. Domestic timber prices could crash due to surplus stocks, discouraging neighbouring states from using tn ports. This in turn would have led to loss of valuable revenue for Tamil Nadu.

With the planned felling of extensive teak plantations in the Cauvery basin (comprising Cuddalore, Thanjavur, Nagapattinam and Thiruvarur districts), the state forest department anticipated added pressure on the market. "We have raised plantations along the Cauvery canals for the past 30 years. Now we want to fell these and opt for fresh cultivation," points out a forest official.

While timber merchants in the state have welcomed the order, they are dismayed by the stringent timber transit rules. "The felling and transport of scheduled list timber is governed by severe laws. For instance, obtaining the felling order and transporting timber (even silver oak) has become laborious and time-consuming," laments S P Jayakumar, a timber trader of tn. "That is why we purchase timber from Karnataka where the procedure is relatively less complicated," he adds.

Meanwhile, the Kerala State Small Industries Association (kssia) has reportedly urged the Kerala government not to withdraw the order banning inter-state movement of 49 varieties of timber, including rubber, to other states. This order was issued in 1981 to protect Kerala's wood industry. kssia members feel that if the regulation is watered down, it would adversely affect packing case, veneer plywood and match-box making units.

So far as the Tamil Nadu government is concerned, there appears to be no going back on its decision. In the long run, the prospective gains are too tempting a proposition for the state to log off.