Beef, the staple food of the British, finds itself out of favour as a ban on its sale sweeps across UK and also the European Union 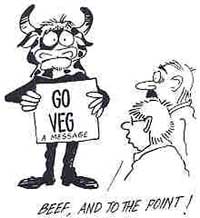 IT TOOK a total of 10 deaths for the British government to finally acknowledge the seriousness of a threat which was literally being shouted from the rooftops for years. What is being referred to here is the suspected link between the Cruetzfeldt-Jakob disease (CJD) and bovine spongiform encephalopathy (BSE), - aka mad cow disease - a malady plaguing British cattle. Reportedly, a new strain Of QD was the cause of the deaths and as the UK health secretary, Stephen Dorrel, opined, "The most likely explanation for the disorder was exposure to the bovine disease."

This admission of the government is a complete volte face from its earlier stand when it had categorically stated that British beef was safe and that it could be eaten with confidence. In fact, John Gummer, the then agriculture minister, went so far as to publicly down beef burgers. along with his daughter in 1990, when concern over the issue first manifested itself. Now, however, as the crisis deepens, government officials are acting with an unusual alacrity to put in place several measures to restore consumer confidence at home, and also win back those markets in countries which have suddenly developed cold feet about importing British beef.

Goading them into action is the hardest slap of all - the European Union (EU) ban on British cattle and all its by-products. The ban raises a huge question mark on the British beef industry, valued at us $6.5 million, and could, spell catastrophe for farmers. The death-knell has already been sounded for nearly 4.6 million British cattle as plans are being drawn up to slaughter them. over a period of 5-6 years. EU is expected to contribute 70 pet cent of the cost of destroying the cattle while the rest will be met by UK. The prospect of mass slaughter has led to speculations on how it could affect the dairy industry as a whole. The industry engages nearly 12,000 to 15,000 people for processing cheese, butter and milk powder. And shortage of fresh milk supplies could see it dose shop. The ban has other ramifications as well.

In the first place, it has meant an enormous loss of face for the UK. After all, the government was warned before- hand, as far back as in the late '80s, about the dangers Of BSE crossing the species barrier and affecting humans. But it chose to act indifferently until it was too late. And even when the crisis broke out, it failed to act decisively. Paddy Ashdown, leader of the Liberal Democrat Party was scathing in his attack. Said Ashdown, "The dithering, the indecisiveness and the lack of any firm policy... has been catastrophic to trust in the government.and terribly damaging to the livelihoods of tens of thousands in the industry." The crisis has had its undertones reaching even the World Health Organization (WHO) which convened a special meeting on April 2-3 at Geneva. Mounting global concern on the link between BSE and CJD, which is essentially a fatal brain disorder, had triggered off the meeting. Said Hiroshi Nakajima, director, wHo, "The possible link between BSE and QD or its variant once again raises concern about the ability of an infectious agent to cross the barrier between animal and man."

Secondly, the option of slaughtering the cattle, especially those which are aged, is a difficult one. Killing cattle is going to cost the government heavily and there is the concomitant issue of compensation to the -farmers. Yet another dilemma facing the government is the forthcoming elections sometime next year. New taxes to recover the money lost in the current imbroglio may not win support for the ruling party during the crucial race to the seat of power.Further, the plan to cull is seen more as a face-saving measure for the government. The symbolic gesture could reveal that it is finally doing something instead of just acting as a mere spectator. Concedes Dorrel, "The argument over beef has moved on. The question now is consumer confidence. It's one thing to have 'a safe product; it's another to command confidence in the marketplace."

The decision to cull has, however, benefited the poultry sector. As consumers all over UK avoided beef, their staple food for decades, the price of poultry shot up by 12 per cent in the last week of Marchas it became the safer alternative. Share prices of the dairy industry, came down as the beef ban became imminent. The poultry industry is now gearing up to meet the extra consumer demand. The government's decision to ban all uses of animal protein in feed to pigs and poultry has set off another demand for non-animal proteins. This could result in an increase of prices of such alternatives like fishmeal and soyabean and also energy-rich cereals like wheat and barley.