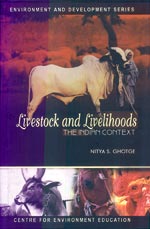 The discussion on livestock in India is in dire need of serious academic intervention. Though that is the case with most issues in this country, there is good reason for prioritising livestock. To begin with, those who are at the bottom of the socio-economic ladder are the ones depending on rearing livestock as a means of livelihood. There is another equally compelling reason. When it comes to know-how on survival tactics in hostile ecological conditions without disrupting the balance of nature in marginal lands, these communities are a veritable treasure trove. And it is most likely, that this knowledge will become invaluable in the years to come, even as water and land resources continue to deteriorate due to mismanagement. Nitya Ghotge's treatise is a welcome incursion into this discussion.

Those familiar with livestock issues might find Livestock and Livelihoods... too basic in its approach. But it must also be kept in mind that the veterinary surgeon has attempted the formidable task of covering the entire scope of India's livestock sector in a mere 137-page overview. In seven neatly divided chapters, Ghotge has addressed issues as varied as historical accounts of domestication of animals, patterns of livestock rearing in India and of course, age-old traditional practices.

The line of enquiry adopted betrays an economic as well as an ecological tone. However, the dominating impression is more romantic than anything else. Ghotge defends her approach: "One has tried to be dispassionate while presenting the facts but, sometimes passion forces us to speak a little louder and a little more harshly. This is especially true when one is up against policies and programmes that have been designed without any care or concern except for the economic one. This, inevitably forces animals to be used and exploited for human needs and then abandoned when they are no longer useful."

Ghotge doesn't just deliberate over problems. She gets into policy alternatives and provides a framework as well. Working in the livestock sector one runs the risk of being in a state of protracted disappointment. Especially so, given that the government's urban preoccupation hasn't caused as much havoc to any other sector. But Ghotge is hopeful. She has great faith in the adaptibility of India's marginal farmers. According to her: "Their ability to shift from water-intensive crops to those that need little irrigation and then to livestock is a mark of their tenacity."

For those new to the livestock issues, Ghotge's book is a good introduction. For old hands, it is a timely refresher.