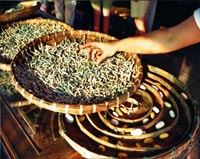 Transgenic silkworms that make a human protein have been developed in Japan. The genetically engineered worms spin threads that contain a form of the human protein collagen -- a substance widely used in cosmetic surgery to reconstruct damaged flesh.

To create the worms, scientists from the Japan-based University of Hiroshima inserted human collagen genes into the dna of the worms' eggs. In due time, the eggs hatched and the worms began spinning their cocoons, which not only had silk, but collagen too. The collagen accounted for around 10 per cent weight of the cocoons. And it was extracted easily. The researchers made sure that collagen would only be produced in silk by linking the genes to a switch that normally activates fibroin -- a protein expressed exclusively in silk glands. "It's an amazing technology," says biotech consultant Florian Wurm of the Swiss Federal Institute of Technology in Lausanne, Switzerland.

Companies hope to harvest collagen for many applications including artificial skin and wound dressings. Japan, China, India and other countries could convert workshops almost overnight to the lucrative production of collagen or other biomedical proteins, says Wurm. "This is something they should jump on to right away." Some think farm animals and plants have major advantages over silk worms, which produce relatively low yields by weight. However, the silkworms can start producing threads within six weeks, faster than crops can be grown, or animals raised.