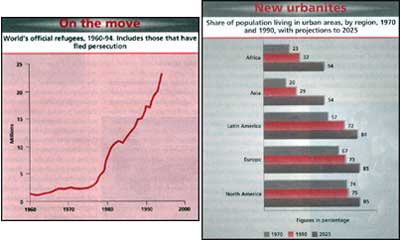 The number of people emigrating is rising steadily every year. All these movements derive from the failure of societies to meet the fundamental needs and aspirations of their citizens, for safe places to live, or for jobs. Poverty and environmental degradation create scarcities that push people out of their original habitats. War and disintegration unsettle millions, and barring occasional hazards - a Chernobyl or Bhopal - famine, combined with political extremism and armed conflict account for the majority of migrations. Of late, large disparity in income levels have been found to be at the root of some of the largest population movements of all times.