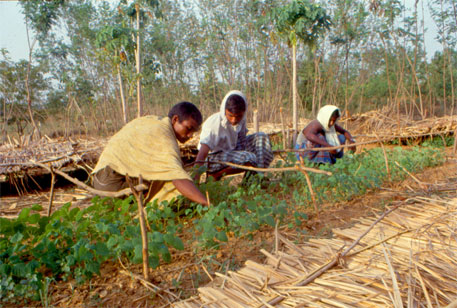 The Narendra Modi government’s first year was perceived as anti-poor and pro-business. During the 2014 Lok Sabha poll campaign, Modi had come down heavily on the United Progressive Alliance (UPA) government’s rural programmes, citing them as doles. Several of Modi’s ministers have also criticised the massive UPA spending on rural welfare, saying it was a hindrance to overall development and sheer wastage of public money. The 2015-16 Budget maintains this notion.

One of the key promises of the NDA government has been to ensure housing for all. But the Budget allocated in this sector is much less than the previous one.

Modi said during his election campaign that a panchayat should be to a village what the Parliament is to the country. But in the 2015-16 Budget, the panchayati raj ministry has been the hardest hit. It has been stripped off many schemes and given just Rs 60 crore.

Sanitation (rural)
Modi received a lot of praise for launching the Swachh Bharat Abhiyan (Clean India Campaign). The prime minister has also promised to make India defecation-free by 2019, the year of the next Lok Sabha elections. But his first full Budget does not reflect this.

Drinking water (rural)
A key ingredient of the Gujarat model that Modi used to his advantage is 24X7 water supply. Though the prime minister had talked about Gujarat’s rural drinking water supply model, the Budget has a different story to tell.

Education
There has been a huge setback to Right to Education (RTE) as the responsibility has now shifted to states after reduction in the elementary education fund.

Agriculture
Drought followed by unseasonal rainfall in February-March resulted in crop loss over nearly 200,000 hectares in northern India. Another “deficient” monsoon this year will lead rural India to slip deeper into the agrarian crisis. But the government has not taken any concrete step to control the situation. Instead, it has reduced the Budget and put the responsibility on the states.

The amendment will bring about the following changes:

In 2010, the Centre launched the Financial Inclusion Plan (FIP) under the Reserve Bank of India’s (RBI) supervision to achieve universal banking by 2016.

In August 2014, Modi re-launched FIP by naming it as Pradhan Mantri Jan-Dhan Yojana with a revised target to be achieved by January 2015.

Though the target was achieved, 67 per cent of the bank accounts had no transactions (meaning the accounts were inactive).