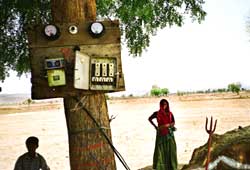 the Union government's rural electrification drive appears to have suffered a setback following the revision of parameters to declare a village electrified. With the changed norms, the number of states declared as having achieved complete rural electrification has dipped to a mere five -- Punjab, Haryana, Delhi, Goa and Kerala -- from 11 in 1991.

Before 2004-2005, the criterion for a village to be declared as electrified was exceedingly simple and achievable: a village just needed to "use electricity within its revenue area for any purpose whatsoever". But now a village is deemed to be electrified only if "the basic infrastructure such as distribution transformer and distribution lines is made available in the inhabited locality within the revenue boundary of the village; any of the public places like schools, panchayat office, health centres, dispensaries, community centers, etc, can avail power supply only on demand; and the number of households electrified is at least 10 per cent."

Though the picture appears grim, experts say the revision has helped get rid of fudged data provided by state governments and has brought out the real statistics of rural electrification, thereby providing scope to improve the scenario.