Rural people can now get anganwadis on demand 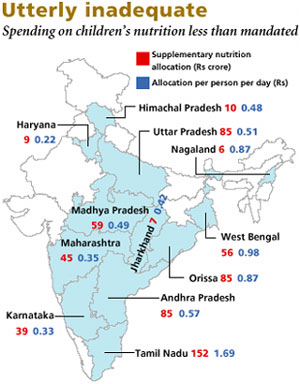 GUARANTEES for social services have been kicking in of late. After guarantees for rural employment and education, people will find it easier to get an anganwadi on demand. On December 13, 2006, the Supreme Court has ordered the government to set up 8 lakh more anganwadi centres in the next two years. Currently there are 6 lakh centres.

Anganwadis are the main agents under the Centre's Integrated Child Development Services (icds), which is India's only scheme that looks after the overall development of children with that of expectant mothers. Anganwadis are tasked with catering to nutritional and other health needs of children under the age of six. The centres run by anganwadi workers function as pre-school crches for rural communities. Children under the age of six constitute 16 percent of India's population and half of them are malnourished.

In a series of orders, the court has ordered that rural people and slum dwellers must get an anganwadi on demand. The government has to set up an anganwadi centre within three months of demand from a settlement that has at least 40 children under six but no centre to cater to the nutritional needs of the children.

The apex court orders are based on its interpretation of the constitutional position on fundamental rights it says the right to life means a right to "life with dignity". "The order is crucial to the aim of eradicating malnourishment among children under six," says Jean Dreze, a commissioner appointed by the court in connection with a petition it has been hearing against the haphazard implementation of icds since 2001.

There is an anomaly in the way the scheme is structured. Though a centrally-sponsored scheme, state governments are responsible for its implementation. At present, state government have the power to decide whether to set up an anganwadi centres.
But with the commissioners of the court reporting that icds implementation has been well under par, the court has held chief secretaries responsible for overhauling the implementation process. Chief secretaries of nine states have been asked by the court to appear before it to explain why earlier orders on icds have not been implemented.

The record is poor. Despite the wide ambit of the scheme, only 25 per cent of children under six have been covered. Corruption has marred the scheme's effectiveness. In October 2004, the apex court said in an order that contractors could not be used for supply of food in anganwadi centres. Instead, local communities and self-help groups should be given the task of procuring grains and preparation of food distributed. Fifteen states didn't file compliance reports, as they were supposed to. Going by field reports, contractors still call the shots.

Apart from the corruption problem, budgetary allocation for icds is inadequate. The budgetary allocation for icds for 2006-2007 is Rs 4,543 crore. But if coverage is to be increased from the current 4 crore children through 7 lakh anganwadis to 16 crore children through 17 lakh centres Rs 18,000 crore will be needed. Within the scheme, allocation for supplementary nutrition has the lowest priority, despite its importance.
In an elaborate exercise that tracks the funding of the scheme in detail, the court has fixed per child spending on supplementary nutrition, doubling the allocation for it. It has ordered that government must allocate and spend Rs 2 per child per day, with the Centre and state governments sharing the cost. For severely malnourished children, the figure per child has been fixed at Rs 2.70. Since icds factors in supplements for expecting and lactating mothers, the court fixed Rs 2.30 per mother.

This, presumably, was to address a situation in which though the government had fixed Re 1 per child for supplementary nutrition, including the cost of food, fuel, condiments and administration, many states have allocated less than this for the nutrition component (see map Utterly inadequate). In half of the 12 states for which official data is available, state governments were spending less than 50 paise per child per day. In Bihar, the figure is 15 paise.