With Russia blowing hot and cold on ratifying the Kyoto Protocol, the ninth conference of parties (COP-9) to the UN Framework Convention on Climate Change (UNFCCC) was reduced to a near non-event. The meeting -- held in Milan, Italy, from December 1-12 and attended by over 5,000 participants -- ended with the world no wiser about Moscow's intentions. In fact, the confusion over the matter only increased 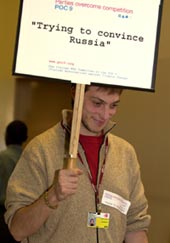 With Russia blowing hot and cold on ratifying the Kyoto Protocol, the ninth conference of parties (cop-9) to the un Framework Convention on Climate Change (unfccc) was reduced to a near non-event. The meeting -- held in Milan, Italy, from December 1-12 and attended by over 5000 participants -- ended with the world no wiser about Moscow's intentions. In fact, the confusion over the matter only increased.

During the early years of the protocol, the us was accused of throwing a spanner in the works. But ever since the superpower dumped the pact altogether in 2001, Russia seems to have assumed the spoiler's role. "We did everything we could with Russia.... What else could we have done?" wondered Italian environment minister Altero Matteoli. The statement, made at cop-9, summed up the frustration of those who believe it is high time the protocol came into force.
On the second day of the conference, news trickled in that Russia had decided not to give the green light to the Kyoto pact -- a proposed international treaty to tackle global warming and climate change. "The protocol places significant limitations on the country's economic growth. Of course, in its current form, it cannot be ratified," said Andrei Illarionov, Russian President Vladimir Putin's chief adviser on economic issues. He is known to be staunchly opposed to the protocol.

"While Illarionov's opinion will be music to the ears of the us administration, it's far too early to be reading the Kyoto Protocol's funeral notice," pointed out climate campaigner Steven Guilbeault of pressure group Greenpeace International. "Illarionov does not speak for the President or the Russian government," asserted Alexey Kokorin, head, World Wide Fund For Nature's (wwf) climate change campaign in Russia. Kokorin dismissed the economic adviser's statement as pre-election political manoeuvring. It may be noted that the country had its Duma elections on December 7.

un climate talks spokesperson Michael Williams, too, remarked in a somewhat similar vein: "These views should not be construed as a formal rejection like we saw with America." Williams added: "We remain optimistic that...Russia will ratify."

There were some who felt that the Russians were trying to drive a hard bargain in order to get maximum concessions, like a guaranteed purchase agreement for their surplus emissions, from the countries that had gathered in Milan. "Russia holds the key to the ratification of the protocol, and when you hold the key, you want to get the most out of it," observed Margot Wallstrom, the eu Environment Commissioner. According to this school of thought, Russia thinks that without the us it is unlikely to find buyers for its surplus emissions ('hot air' in climate parlance).

Even as the conjecturing was on, Russia changed tack the very next day. Mukhamed Tsikhanov, Russia's deputy economy minister, declared that the country was "moving towards ratification" and no decision had been made thus far. It is being speculated that the issue of Russian ratification may not crop up again till the next presidential election, scheduled for March 2004.

Significantly, the implementation of the Kyoto Protocol is pivoted on Russia's ratification. The country has, however, been prevaricating on the matter for over a year now (see: 'Russia reneging?', Down To Earth, October 31, 2003).
Despite the obvious threat from climate change (see box: Cutting a swathe), the eu noted that 13 out of 15 countries in the bloc were falling short of their emission reduction targets under the protocol. Only Sweden and the uk were on track. Spain was doing the worst.

"Unless further steps are taken, the eu as a whole and most of its member states will miss their Kyoto goals," said Wallstrom. She revealed that with the existing policies, the eu would achieve only a 0.5 per cent cut in1990 emission levels instead of the 8 per cent it is required to achieve by 2012.
Amid these developments, an old Kyoto-basher launched a fresh tirade against the protocol. The us administration called it "an unrealistic and ever-increasing regulatory straitjacket". Instead, the country promoted voluntary efforts by industry and long-term technological studies as means to deal with global warming. In this regard, it showcased its bilateral research and development projects with over a dozen countries. Paula Dobriansky, the us undersecretary of state for global affairs, claimed that the country's climate change policies were the "only acceptable, cost-effective option" to reduce greenhouse gas emissions.

The New Economics Foundation (nef), a uk-based independent think-tank, called for slapping trade sanctions on countries refusing to cut emissions. The foundation suggested that the eu should tax imports from such countries due to the competitive advantage enjoyed by them as energy cost increases. "The us understands only economic signals," averred Andrew Simms of nef.


While the fate of the protocol itself remained uncertain, negotiations on rules to help in implementing it continued. The second week of the meeting saw a consensus being evolved on detailed guidelines for 'sinks' (trees that absorb the greenhouse gas carbon dioxide from the atmosphere) under the clean development mechanism. The latter allows industrialised nations to invest in afforestation projects (besides energy efficiency and renewable energy projects) in developing countries to gain credits for reducing emissions.

The agreement on the rules envisages that sink project proposals should contain information to assess the project's socio-economic and environmental impact. Canada was against any binding set of criteria as proposed by Switzerland, Tuvalu and the eu. It was decided that these projects should also contribute to conservation of biological diversity and sustainable use of natural resources. Further, given the non-permanent nature of sinks -- for instance, a forest fire can cause sequestered carbon dioxide to be released back into the atmosphere -- regular monitoring would be necessary.

The rules do not explicitly exclude monoculture plantations. Nor do they prohibit projects involving genetically modified organisms (gmos) or invasive alien species. It has been left to the host country to assess the risks associated with such projects and act accordingly. Though the eu did not want gm trees to be included in the proposals to fund forestry projects, countries such as Canada and Argentina argued for their inclusion. Environmental groups opposed to gm trees being brought under Kyoto thought the rules were "two steps forward, one step back".

The agreement also defines small-scale sink projects which are expected to benefit local communities. Activities being developed or implemented by low-income communities and individuals that could result in the net removal of less than 8 kilotonnes of carbon dioxide per year will be considered small scale. If such a project helps to remove more greenhouse gases, credits for excess removals will not be given. Simplified rules pertaining to these will be finalised in 2004 during the next conference in Buenos Aires, Argentina.

The thorny issue of assistance for economic diversification was also postponed until next year. Oil producing economies such as Saudi Arabia wanted money from the special climate change fund if cuts in greenhouse gas emissions spurred a shift from oil to wind or solar energy. Donors say the fund, likely to total about us $50 million every year, would be left with no resources for others if it were utilised for the Organization of the Petroleum Exporting Countries (opec). German environment minister Jurgen Trittin said that the eu (with Canada, Iceland, New Zealand, Norway and Switzerland), which has pledged about us $410 million a year beginning 2005, was not willing to give anything towards such diversification.

Top priority would, however, be accorded to funding adaptation activities to address adverse impacts of climate change. These will cover areas such as water resources and land management, agriculture, health, infrastructure development, and fragile ecosystems like mountains and coastal zones. Technology transfer and capacity-building activities in developing countries would also be considered.