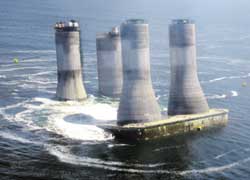 Russian authorities have withdrawn a key permit to the world's largest liquefied natural gas (lng) project off the coast of Sakhalin Island on environmental grounds. Energy analysts, however, interpret the move as an attempt by Russia to wrest back control of its natural resources from large oil multinationals.

Sakhalin's oil and natural gas reserves, containing an estimated 14 billion barrels of oil and 2,700 cubic km of gas, are strategically locked-in by long-term contracts by globally dominant corporations like Exxon and Shell. The us $20 billion Sakhalin- ii project is managed by a consortium, the Sakhalin Energy Investment Company, which includes Royal Dutch Shell and two Japanese companies Mitsui and Mitsubishi. The project includes plans to build four pipelines to construct one of the world's largest production plants for lng. Last month Russian environmental authorities halted the construction of two onshore pipelines, alleging that the consortium has violated environmental laws, failed to build anti-erosion facilities and has dumped industrial wastewater in the Aniva Bay. Following the allegations, the natural resources ministry revoked the consortium's permit in the last week of September.

Environmental groups have hailed the decision and said the project threatened Sakhalin's ecosystems; it degraded the only-known habitat of the endangered western pacific grey whale and affected livelihood of thousands of islanders who depend on fishing. Energy experts, however, contend that the Russian government is using the environmental permit issue as a pretext for obtaining a greater share of revenues from the project or forcing involvement of the state-controlled Gazprom.