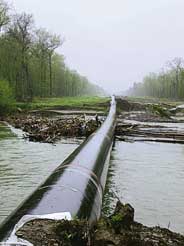 THE Russian government has extended its probe into the alleged environmental violations at the Sakhalin oil and gas project by another month, and has warned the project managers of criminal charges (see 'Row over resources', Down To Earth, October 31, 2006).

"The breaches at Sakhalin-ii fall under five articles of... criminal law and we think it is necessary to apply it," Yuri Trutnev, the natural resources minister of Russia, said at a recent meeting with environmental inspectors and the project operator, Sakhalin Energy Investment Co, at Yuzhno-Sakhalinsk, the capital of Sakhalin Island. Inspectors will calculate the environmental damage within the next four months, he said.

The us $22 billion Sakhalin-ii project is the world's biggest liquefied natural gas project, which is under construction off the coast of Sakhalin Island.Turtnev's ministry has accused the project operator and its contractors (Royal Dutch Shell and two Japanese companies, Mitsubishi Corp and Mitsui) of massive environment and safety violations at Sakhalin-ii and threatened to revoke the permit, which could halt construction. Trutnev has said the concerns include deforestation and damage to the sea around the Pacific island of Sakhalin, as well as sand clogging riverbeds and the potential for pipeline damage in area prone to mudslides.

Import-dependent Japan is looking to Sakhalin to meet much of its future energy needs. Last month, after Russia revoked environmental approval for Sakhalin-ii, Japan said a major delay could hurt diplomatic relations. The European Commission too is taking the move very seriously. Experts see the move as president Vladimir Putin's drive to force involvement of the state-controlled gas monopoly Gazprom in the project and wrest back control over the world's biggest oil and gas deposits.

Meanwhile, Russian technical standards agency Rostekhnadzor has pointed fingers at the country's oil and gas pipeline infrastructure saying that most of them are in a critical condition, causing inexcusable environmental damage. Safety measures put in place were insufficient; more than 30 accidents have already happened this year due to exposure and corrosion. Russia's crude oil pipeline monopoly Transneft, the world's largest pipeline operator, controls the vast majority of oil pipelines, while Gazprom owns all the gas routes.