With Russia participating in the first unified space station project, international cooperation reaches new heights. But there are also doubts about the US-led venture. 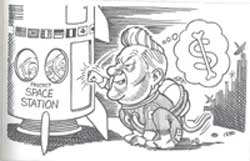 AFTER much dithering, Russia has joined Europe, Canada and Japan in the US-led international space station project. Russia will merge its Mir programme with the US Freedom programme for the project, the first of its kind.

Orbiting where Russia's Mir 1 is currently deployed, the project will consist of the proposed US space station Alpha linked with the planned second-generation Mir station. Beginning in 1997, the two former ideological rivals will jointly develop the station that will expand into a permanently staffed space platform by the end of the century.
Even before Russia agreed to join in, the unified station was attacked by US senators and the Russians themselves. There were also apprehensions of the implications of Russia's involvement on the programmes of the existing partners.

A report by the Cosmonaut Training Centre (CTC) at Star City in Russia said the country's space programme would suffer if it takes part in the project. It said building an international station mainly with US equipment and European, Japanese and Canadian contributions would reduce Russia -- with two modules and transport vehicles in the project -- to a "minor player". Another disadvantage, says the report, is that the station will not overfly the whole of Russia -- as was planned for Mir 2 -- and provide vital remote sensing and environmental data.

The CTC report said the US is "carrying out a programme of immobilisation of our flight experience on stations". It complained orbital station know-how is being sold to the US for $800 million, though Russia has invested "tens of billions of roubles" in the development of the technology. Besides, Russian industry would lose vital orders because of US dominance in the programme, the report added.
Earlier, amid uncertainty about Russia's involvement in the project and the stability of the Russian government, the US Senate had turned down yet another attempt to halt the project -- by a margin of 59 to 40 votes. However, four key members of the committee responsible for space -- Democrats George E Brown and Louis Stokes and Republicans Robert S Walker and Jerry Lewis -- warned the Clinton administration about the pitfalls they foresee in the joint project.

US president Bill Clinton had spoken of the space station project "as an important science and technology investment for the United States and as a symbol of peaceful international cooperation". He added, "We now have a historic opportunity to include Russia in this endeavour, thereby achieving an important step in putting the Cold War behind us."

US vice president Al Gore had supported this view, saying, "It is important to realise that this initiative on space cooperation fits into the context of a much larger partnership with Russia -- a relationship that will define the post-Cold War era."
Democrat Senator Tom Harkin, who previously opposed the project, said, "I believe the agreement we reached with Russia is so monumental and so important to the future of our relations with Russia and to the future of all space exploration and non-proliferation of weapons of mass destruction and systems of delivering them, that we must vote for the station."

Though Brown, Stokes, Walker and Lewis said they shared these views on the importance of assisting Russia, "we wish to caution against premature commitments or technical decisions that may result in cost overruns". They said a unified space station should be brought to "at least the maturity of the present design before substantial budgetary commitments are proposed" and were concerned about "unnecessary loss of US jobs".

Continuing modifications in the space design and the inclusion of Russia in the project also prompted European, Japanese and Canadian authorities to assess the major delays and engineering changes to their programmes.

Even before Russia confirmed its involvement, US changes in the station's basic programme had significantly affected the international partners. The Canadian and Japanese elements of the project were delayed by up to four years, thereby increasing their cost. The Italian logistics module has an increased role but will incur at least a two-year delay and a third Italian logistics module also will be required.

Besides, some Europeans are concerned that the US and Russia will form a space bloc under which the European Space Agency (ESA) will again end up playing a secondary role.

Another sour spot is NASA's relationship with NPO Energia, the giant Russian company that dominates the country's manned space programme. ESA's concern is that the relatively weak Russian Space Agency (RSA) needs to become more dominant over Energia. RSA's weak position had slowed US-Russian planning for the scheduled docking of Mir in 1996, because Energia objected to it not being paid by the Russian agency. Though the situation has since been corrected, similar disruptions would prove disastrous for the space station programme.